Attuning to calmness and clarity

Albuquerque, New Mexico (USA) -- Most people are asleep at 5 a.m. At the Albuquerque Zen Center, at 2300 Garfield Ave. S.E., practitioners of Zen Buddhism are settling down to meditate at that time. It's one of many open meditation sessions at the center held throughout the week. 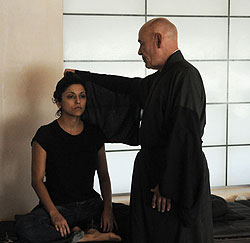 "It's for people who get up," said Seiju Bob Mammoser, the center's abbot. "The idea was to design a practice schedule that is accommodating to people who have jobs, families, responsibilities in their life, but would like the opportunity and benefits of doing some form of practice regularly."

Zen Buddhism came to the United States in the '60s by way of Kyozan Joshu Sasaki Roshi, a Japanese master. He donated the money for the land on which the center was built and held a christening ceremony for the building in 1997.

His followers say Roshi was the inspiration behind the character Yoda.

At the age of 101 and still actively teaching, Roshi has created an international community of Zen followers and founded Zen centers across the continent, from Southern California to Puerto Rico and many places in between.

Though rooted in rigid tradition, the American form of Zen is distinctly different from the traditional Japanese practice.

"There are no Zen centers in Japan. There are only temples," Mammoser said.

Mammoser said the center is structured architecturally and spiritually to promote calmness, clarity, awareness and compassion.

"Even the gravel in the parking lot was a deliberate choice," Mammoser said. "When you walk on gravel, there is more tactile and auditory feedback. You have subtle but tangible cues which will hopefully call you to be more present in what you're doing."

Aside from the gravel parking lot, the center offers monks' quarters, a meditation hall, an outdoor tholus (a sort of 24-hour 'emergency' meditation/relaxation spot) and several rock gardens.

"Even though you're in the middle of Albuquerque, you're surrounded by pine trees," he said. "Your perspective is changed, and you're surrounded by a touch of nature. We want people to realize that we are intimately connected with our world and our experience in every moment." In addition to providing morning and evening sitting meditation and beginners' instruction, the center has discussion groups and classes, various outdoor trips and a monthly day-long sitting session.

"Understanding in Buddhism is doing," Mammoser said. "Practice helps, but in doing it as opposed to talking about it, you realize the benefits of the activity. (Meditation) is completely non-conceptual, non-intellectual activity."

He said there is a significant quality in focusing one's attention.

"In the course of working to do it, you uncover many things about yourself that usually just get in the way," he said.

Practitioner Jennifer Jones says she started coming because a friend suggested it would help her relax and relieve her back pain.

"Everyone comes for their own reasons, but they make new reasons to stay," Jones said.

Meditation and class schedules can be found online at www.Azc.org.