In the Arizona desert, Buddhists will embark on a three-year silent retreat

There will be no word from the outside world in the Great Retreat, only the quiet of rock and cactus. Adherents hope to find enlightenment in the silence, a gift they plan to share when they emerge. Silent

Bowie, Ariz. (USA) -- Deep in a remote desert valley, where rattlesnakes lurk in the scrub, Stéphane Dreyfus and several dozen other Buddhists are preparing to undergo a mind-altering journey: 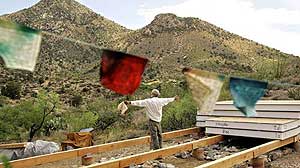 << David Stumpf, 56, a retired biochemist, at the construction site of the cabin he will share with his wife during the 1,190 days of seclusion. (Ricardo DeAratanha, Los Angeles Times / July 2, 2009)

There will be no word from the outside world in the Great Retreat, only the deafening quiet of rock and cactus, with seemingly endless time to ponder the emptiness of life.

Dreyfus and his fellow adherents hope to find enlightenment in the silence, a gift they plan to share when they emerge from their long seclusion.

They know that outsiders might dismiss them as eccentrics on a strange utopian trip, but their resumes suggest otherwise. Among them are an airline pilot, a dermatologist, a retired biochemist and a former television editor.

They're jettisoning the trappings of their middle-class lives to carry on a Buddhist tradition that traces its lineage through the Dalai Lamas of Tibet. For many in the group, that means leaving behind six-figure incomes, young children or aging parents for the solitude of cramped retreat cabins made of adobe, wood -- even hay bales.

Prolonged silence, they explain, is the only way to reach the deep level of inner awareness required to bring true happiness to the world.

"If I can get to the position of being perfectly free of suffering and develop high levels of mental clarity that cause enlightenment, I can show others how to get there perfectly, quickly," said Dreyfus, 32, who left a job as an assistant editor on the prime-time show "The Bachelor" to teach yoga and prepare for his undertaking.

Dreyfus, a Berkeley native, will be joined by his fiancee, Jessica Kung, a Yale graduate and also a yoga teacher.

When they start the retreat late next year in this corner of southeastern Arizona, they will be newlyweds, sharing a 500-square-foot cabin, communicating only through gestures and facial expressions, and refraining from physical intimacy. Such pleasure, they both say, would dissipate prana -- inner energy -- distracting from the important karmic work at hand.

"I feel a desire to have some serious PhD-like study in yoga [and] meditation," said Kung, 27. "There is nothing better to do with my youth."

Such talk provokes bewilderment, skepticism and even anger from the family members of many of those who will join the retreat.

Hubert Dreyfus, a professor of existential philosophy at UC Berkeley, worries that his son Stéphane is wasting his talent for writing and filmmaking to pursue ideas he sees as irrational.

The elder Dreyfus conceded his son is happier than ever. Still, he can't understand why anyone would leave loved ones behind to disappear into the desert -- in this case, for 1,190 days. "I'm just torn," said Dreyfus, 79. "I want grandchildren."

Each retreat participant will need $60,000 to $75,000 to build a cabin and pay for three years of food and supplies (the menu will probably include such staples as lentils, rice, beans, potatoes and other fresh vegetables).

Some already have set aside the money. A few are searching for sponsors at yoga and meditation seminars, or relying on the generosity of others on the retreat.

"I'm waiting for a miracle," Ben Kramer, a 33-year-old Floridian, said recently as he practiced yoga poses with his girlfriend inside an adobe temple not far from the retreat site.

Those on retreat will cook for themselves in cabins equipped with kitchens and bathrooms. Power will be supplied by solar panels or propane tanks, and members will probably have air horns to summon help if something goes wrong.

Volunteer caretakers, fellow Buddhists who live nearby, will help by growing or shopping for food and dropping it off twice a week. David Stumpf, a retired plant biochemist from the University of Arizona who is planning to join the retreat, is in charge of installing a water supply system in the valley.

Stumpf has nearly finished building the 600-square-foot cabin he and his wife, Susan, will share on a small patch of earth surrounded by paddle cactus and ocotillo plants, whose red blooms shoot from the ground like Fourth of July fireworks.

Surveying the rolling landscape and cloud-streaked sky one recent day, the 56-year-old proclaimed the setting ideal for deep meditation. "This place is stunning at sunrise," he said. "The lighting on the hillside is just magical."

To reach "retreat valley," drive 107 miles east from Tucson on Interstate 10 through empty stretches of desert to the small town of Bowie, then head south on a narrow asphalt road. From there, a rutted dirt roadway leads to Diamond Mountain University, a nonprofit Buddhist campus where footpaths connect an adobe temple, a tented student lounge and round Mongolian-style yurts.

Another short road from the university to retreat valley is even more primitive, coursing through brush-covered hillsides once home to a cattle ranch.

In the heart of the valley is a single yurt within sight of several cabins under construction. This is the home of Geshe Michael Roach and Lama Christie McNally, the university's founders.

Roach and McNally were born in Los Angeles, two decades apart. Both grew up as Episcopalians.

An altar boy in his youth, Roach, 56, thought he might become a minister. Then he traveled to India while studying religion, Sanskrit and Russian at Princeton University. He was driven by a question he believed Christianity did not address: If God existed, why did people suffer and die?

It was a poignant query; Roach's mother and father had died of cancer about the time he was finishing high school, and his brother had committed suicide -- all within a year of one another.

Buddhism offered him answers: Life and death had no intrinsic meaning. Instead, reality depended on perception. Through meditation, yoga and other practices, negative thoughts could be replaced with positive ones, allowing karmic seeds planted in the heart to ripen into happiness.

The idea of karma was key: How people acted in the past determined what they experienced in the present. Roach spent two decades studying at monasteries in India and the United States. He was ordained a monk in his early 30s and later earned a Geshe degree, the equivalent of a doctorate of divinity, one of the first Westerners to do so.

McNally, 36, who studied philosophy and literature at New York University and then traveled to Tibet and Nepal, met Roach at one of his teachings in New York in the late 1990s. They have been spiritual -- though celibate -- partners for a decade, they say, an arrangement that has provoked criticism from some Tibetan Buddhists and scholars, who point out that monks are barred from relationships with women.

In 2006, the office of the Dalai Lama, the spiritual leader of Tibetan Buddhism, cited Roach's "unconventional behavior" in rebuffing his effort to teach in Dharamsala, India, seat of the Tibetan government in exile.

"The older lamas are disapproving," said Robert Thurman, a professor of Buddhist studies at Columbia University, who considers Roach a friend. "People have their fingers crossed that he will turn around and eventually do the conventional thing."

Roach and McNally respond that their stream of Buddhism encourages such partnerships, and that other Buddhist teachers have done the same, if privately. The difference, they say, is that they publicly acknowledge theirs.

The two devote themselves to disseminating Buddhist teachings. They have written several books on meditation and yoga, and have preserved ancient manuscripts in an extensive online database.

In 2000, they led four other Buddhists in three years of seclusion on a ranch not far from retreat valley. Each day, they rose at 3:30 a.m. for the first of four extended meditation sessions, which were often conducted in 120-degree heat. Several times, they emerged briefly from their yurts -- and Roach from his silence -- so that he could share insights. The members wore blindfolds to help them maintain their solitary states.

"We believe that everybody is in pain right now, because they have all these negative thoughts running in their heads all the time," Roach said recently. "If you can figure out how to stop your own pain, then you can teach other people how to stop theirs."

The retreat participants were so isolated that they did not learn about the Sept. 11 attacks until they came out of seclusion nearly 21 months later. "We still haven't seen the footage," Roach said.

The project was not without mishap. One member was bitten by a rattlesnake and had to be taken by ambulance to a Tucson hospital. The same woman left briefly to care for her dying father after she received a letter informing her of his failing health. Her departure was disruptive to the others, they say. But she returned to finish the retreat, and went on to complete another.

Roach and McNally say they believe the first Great Retreat produced a concrete result: the birth of their university in the dusty flats just below the valley's gates.

Now, hundreds of students converge on Diamond Mountain throughout the year, supporting the university with donations and taking classes in such subjects as the nature of omniscience and the purification of negative karma. Classes are free, but luxuries are scarce. Student housing consists of yurts, pup tents or mobile homes stationed in the dirt parking lot. Wasps dart overhead and the heat is ever present.

Despite the harsh conditions, Bill McMichael of Chicago jumps at every opportunity to visit Diamond Mountain, sometimes bringing along his daughter and son, ages 7 and 9.

The 42-year-old American Airlines pilot said he intends to quit his job flying DC-9s to enter the three-year retreat. He also will take a lengthy leave from his children, who will live with his former wife. Friends will bring the kids to retreat valley two or three times a year, but McMichael will not be allowed to speak to them, communicating only through gestures or notes.

"Leaving the kids is the most difficult part," he said.

McMichael has tried to explain the retreat in terms the youngsters can understand, telling them that he is going to become an angel and reach heaven, and that he will show them how to become angels too. He sees a rare opportunity to bequeath them ancient wisdom.

"I can give them something that death can't take away," he said.