The downturn in the economy has stalled the completion of a large statue at the Tam Bao Buddhist Temple in east Tulsa. 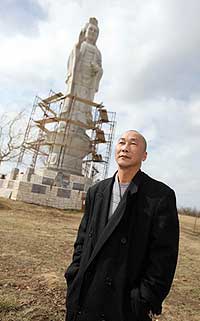 << Abbot Thich Duc Tri stands in front of a statue being built at the Tam Bao Buddhist Temple in east Tulsa. The temple is raising funds to finish building the statue, which can be seen for miles, to honor the United States' acceptance of Vietnamese refugees. STEPHEN PINGRY/Tulsa World

Thich Duc Tri, the abbot of the temple, said through a translator that the granite statue was made in Vietnam and shipped to Tulsa last summer in 12 pieces and was put in place with cranes.

Members of the temple imported the statue to express appreciation to the United States, which accepted them as refugees from Vietnam and gave them the opportunity to live in freedom, Duc Tri said.

"We want to contribute to the society the symbol of the compassionate love to all beings and also to beautify the city of Tulsa," he said.

The statue represents Quan Am Bodhisattva, the embodiment of compassionate, loving kindness.

"She is like the mother who loves all children and wishes for them to live in peace and happiness," Duc Tri said.

The temple has invested $250,000 so far in the statue, much of it gifts from around the nation, he said.

An additional $100,000 is needed to seal the cracks where the pieces are joined, to landscape the area, add parking and install decorative stone lights - 20 of them 10 feet tall and four of them 20 feet tall.

"We are thankful for all the support we have had from members and friends, especially the city of Tulsa, who approved the permit," Duc Tri said. "We hope that we can get more support from everyone
so that we can finish up this great project to bring understanding and love to all beings."

The city approved the statue in March 2009.

Uyen Nguyen, a computer consultant and member of the temple who moved to Tulsa from Vietnam 18 years ago, said the statue "helps remind us of the virtue of compassion. ... If everyone has compassion and love for each other, life will be better."

"A lot of people put their hearts into this as volunteers," she said.