Honolulu, Hawaii (USA) -- An element of sobriety underlies the gaiety of summertime obon festivals, one of the most colorful, popular traditions of the year with the profusion of dances at Buddhist temples statewide. 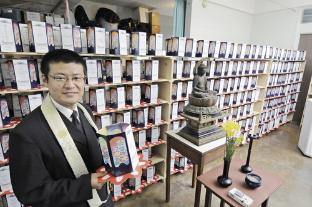 << CRAIG T. KOJIMA / CKOJIMA@STARADVERTISER.COM
The Rev. Koji Ezaki will preside over Haleiwa Jodo Mission's "toro nagashi" ceremony at 9 p.m. today at Alii Beach Park where more than 1,000 lanterns will be released after a bon dance. Buddhist temples statewide are celebrating the obon season, which traditionally begins in July or August, to honor the spirits of ancestors. The Haleiwa mission has been floating lanterns for more than 50 years. About 3,000 people are expected to attend the event.

The reason for the season is to honor ancestors, and the some of the rituals don't necessarily bring peace to the minds of the living.

The Rev. Richard Tennes, a Shin Buddhist minister at the Honpa Hongwanji Mission of Hawaii, said it is important for Buddhists not to get too attached to the folk tales surrounding the obon. Such tales are the basis of the belief that offerings or rituals will affect the spirits of loved ones who have died or that they can nullify the negative karma of the living or the dead. People often fail to go beyond the rituals to study the teachings more deeply, he said.

"As a Buddhist observance the bon dance is symbolic of interdependence and is a yearly reminder that we, the living, are able to dance now because others have danced before us," Tennes said.

Tennes cited an article by the Rev. Alfred Bloom, professor emeritus at the University of Hawaii at Manoa, in which Bloom writes that the season "is based on the legend of the monk Mogallana's rescue of his mother from the hell of hungry ghosts."

In the "Obon Festival - Living and Dying in Buddhism," Bloom writes that when Mogallana asks how to free his mother from suffering, "the Buddha advised him to practice compassion and to give offerings to the monks. When his mother was released, Mogallana danced for joy. His response is regarded as the origin of the bon dance." Celebrated since the seventh century, obon begins on July 15 in some places and in others Aug. 15, he says on www.shindharmanet.com.

Bloom continues, "The way to the mother's liberation from hell was through offerings which appear to be a ransom. One might see it as a means for the temples to raise money to maintain themselves. ... It was through the transfer of merit from good deeds done by the living that Mogallana's mother and other loved ones were able to be freed from hell. This principle is still widely held today."

Tennes explained that some schools of Buddhism believe that rituals and acts of good overcome negative karma, purify the mind and lead to enlightenment and that the merit attained may be directed to benefit one's family members, including the deceased.

But based on teachings of Jodo Shinshu or Shin Buddhism, a sect of the Pure Land tradition, Tennes said, "The observance of obon is clearly not about rescuing our loved ones from hell."

Shin Buddhism teaches people to let go of their anxieties about where their loved ones have gone after death or of spending their own lives in fear of eternal punishment, he added. When a person discovers it is impossible to save himself by being pure and compassionate, that person "begins to rely on the infinite goodness and saving power of Amida Buddha, (defined as) boundless compassion and wisdom, which embraces and saves everyone without exception. When we realize this, we can let go of the need to try to selfishly gain merit for ourselves or for our family," he said.

"Obon provides a time to remember and express gratitude to those who make our existence possible. And this is especially expressed in the bon dance itself. The graceful traditional dances, with their circular movements, music and rhythm, suggest and celebrate the oneness and the continuity of all life."

Bloom agrees: "According to Japanese tradition, the ancestors return to commune with their descendants during this season. However, in actuality the ancestors, our parents and loved ones as well as the many others who shape our modern life, have never left. We live in the light of their contributions. Obon is consequently a time for recognizing our responsibility to life and not merely the marking of death and separation."