Buddhist Geeks and the virtual path to enlightenment

Although no amount of online chatter can replace practising with a real-life community, the wired-up approach has its benefits

Los Angeles, CA (USA) -- First glances might suggest that new technology and Buddhism make for uncomfortable bedfellows. A 2,500-year-old tradition aimed at ending unhealthy attachment seems at odds with gadgetry so addictive that a quarter of smartphone users now check their devices in the bathroom. 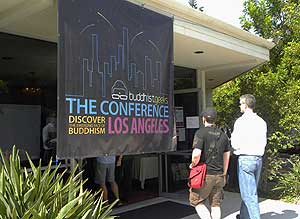 The internet isn't an obviously meditative medium, but it is a vibrant space for fresh expressions of ancient insight. Take the popular Buddhist Geeks podcasts, which feature cutting-edge conversations on how dharma teachings are entering the 21st century, mixing creatively with disciplines like evolutionary psychology, physics and computer science.

After a million-plus downloads, chief Geek Vincent Horn and friends have just held their first live conference, drawing delegates from several continents to discuss "The Science Of Enlightenment", "Seeing Through Culture, Staying In Touch With Wisdom", and "Disrupting The Awakening Industry", among other presentations. The debates naturally extended to a lively Twitter hashtag (#bgeeks11), with followers now eagerly awaiting downloads of the main keynotes.

Geekery could bring a radical heart and soul to 21st century Buddhism. Whereas early western devotees grappled for a meaningful way to practice unfamiliar rituals, there is now a younger, confident cohort unwilling just to imitate their elders. While maintaining a deep respect for history, they are rising to the task of developing forms that feel genuine for their age and culture. Out goes dropping out on an eastern pilgrimage, in come Buddhist start-ups making sharply designed apps for modern meditation.

Some of the innovation is driven by need – online retreats and Skype sessions obviate the problem of geographical distance from teachers and practice centres. But there's also a heavy dose of attitude – one of open-hearted scepticism, pragmatism, and a trust that if the old institutions carry truth, they can withstand some fearless inquiry and youthful energy. It's very much in the spirit of Gautama's original message, the application of which is said to be like making good bread – recipes are handed down, but the dough must always be baked afresh. Old loaves soon turn stale.

For all the apparent novelty, it's striking how very Buddhist these geeks are. Whereas proponents of secular mindfulness have downplayed its heritage with medical, psychological and scientific language, making for friendly assimilation into healthcare, schools and workplaces, Buddhist Geeks make few compromises: technology and tantric visualisation, spiritual bypassing, money and sex are just a few thorny issues raised in the website's top 10 interviews. Rather than aiming for mass appeal with a mainstream message, there's a revelling in esoteric knowledge that only the very committed and very geeky would aspire to.

There are risks in a wired-up approach. As intellectual philosophy it has the nutritional value of menu reading, and it's all too easy to get sucked in and swamped by the endless streams of concept in the Buddhist blogosphere (which, naturally, has its own annual awards, the Blogisattvas).

No amount of virtual chatter can replace the challenges and rewards of practising with a real-life community, and lack of guidance from experienced hands can lead to an unholy mess. Ethan Nichtern, whose New-York based Interdependence Project is also making waves, offers a blunt warning: "The internet is not your teacher."

It was perhaps fitting that the closing talk at the conference came from Dzogchen Ponlop Rinpoche, a robe-wearing Tibetan lama whose Rebel Buddha book and website warn against blind attachment to Asian ways, while at the same time exhorting his students to see through all cultural baggage and into the timeless essentials of enlightenment. He urged the Geeks to "put the magic into the heart of technology", and use it "to create connection not isolation". At least, that's what it says on his @ponlop Twitter feed, which is not, presumably, updated from the bathroom.