Willoughby Britton at the Buddhist Geeks Conference, on the Problem with Meditation 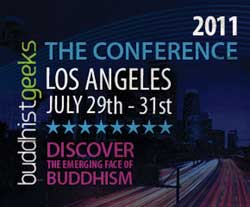 There's nothing crunchy here -- no handwritten signs, no dreads, no Birkenstocks. These techno-literati share a common language. References to the Borg, World of Warcraft and HTML are tossed into discussion of Buddhist concepts of mindfulness, interdependence, the jhanas.

Conference-goers share a belief that a full embrace of the dharma, or the teachings of the Buddha, isn't limited to Himalayan mountaintop hermits but can be a living, 21st-century experience, complete with Wi-Fi.

At one point, organizers ask for volunteers to lead impromptu, free-form discussions. A short blonde with a direct gaze says she would like to hold a conversation about the possibility that meditation can take people to dark places. She is Dr. Willoughby Britton. Her session fills up quickly.

Britton, a researcher from Brown University's Department of Psychiatry and Human Behavior, explains that her work is a rigorous, empirical examination of the difficulties that frequently arise for practitioners of Buddhist meditation. In Christian terms, these are poetically referred to as "the dark night of the soul."

This darkness can manifest as a plummeting existential terror, a bliss that gives way to mania or an unfathomable black depression. The experience has been well known for centuries to nearly all contemplative spiritual traditions, but in the scientific literature on the cognitive effects of meditation, there is little to nothing describing this deceptively common phenomenon.

Britton asked Jack Kornfield, a well-known Buddhist teacher, how often severe episodes of mental instability -- psychosis, mania, etc., to a degree requiring hospitalization -- arose during his retreats at Spirit Rock Meditation Center. Kornfield replied that he saw about one bad case every two years. But he also says he saw two to four cases a year of less severe experiences, debilitating enough to lead to a "clinical impairment" -- for example, being unable to work for a month or more.

The most severe outcome, suicide, was not common, but it had happened once or twice in Kornfield's 30 years of teaching.

Around the room, heads are nodding to the idea that perhaps meditation should come with a disclaimer. One woman shares that she had such an experience in which she felt lost, stuck and deeply depressed for a number of months.

Britton says one issue is the way meditation practice has been marketed to the public in America: as little more than a stress-reduction or relaxation technique. But Britton argues that stress reduction and relaxation are more like side effects than what meditation actually was designed for.

"Meditation comes out of contemplative religious contexts where the goal is -- however you want to call it -- liberation, awakening, enlightenment; some kind of radical transformation of consciousness. So I don't think that it would be surprising to hypothesize that if you practice meditation, it will actually produce some of the consequences that it was designed to produce: a radical transformation of consciousness. But a lot of people are very surprised when their consciousness starts to change, because that's not what they signed up for. They signed up for stress reduction."

Not surprisingly, Britton's message isn't exactly popular; talking only about the pleasant side of meditation sells more tickets. But she's never been shushed, and she counts Kornfield as one of the most ardent supporters of her work. Yet many teachers still don't like to advertise the fact that meditation can take people down a hard road.

"I think there are lots of good reasons why the difficult stages are not talked about," she says. "But that choice has also had consequences, when people get into some territory and they have no idea what's happened to them. I have a number of people who have contacted me thinking that they're schizophrenic, or bipolar, or they have some other really serious psychiatric disorder, but their symptoms have been classic meditation experiences. If there was an appropriate education about what to expect, it wouldn't be as problematic as it is."

Casual observers might be surprised to learn meditation isn't all butterflies and lotus blossoms, but here a sense of relief greets Britton's words. It's refreshing to hear someone say out loud that meditation isn't just about visualizing a calm blue ocean but about plumbing the depths, and it's exciting to know the practice to which so many in this room have devoted themselves is considered worthy of serious attention from a member of the scientific community.

After spending the hour discussing dark episodes, the geeks adjourn to hear the afternoon's keynote. It's about video games.