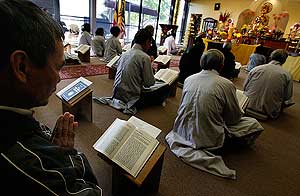 <<(Scott Sommerdorf | The Salt Lake Tribune) Morning service inside the Pho Quang Pagoda Buddhist temple in Salt Lake City, Sunday, November 6, 2011. A dispute over ownership of the temple has led Vietnamese congregation members who have worshiped there for 18 years to be, effectively, evicted. The complex dispute is headed to a January trial.

Instead, the gate stands in witness to a heartbreaking clash within the community. One group kneels and prays solemnly in the cold each Sunday just outside the temple doors. Another faction dons light blue robes, offers fruit and flowers, and lights incense inside before sharing a similar ritual.

Diep Vuong, 70, chanted holy texts in wintry weather recently with about 40 other worshippers who feel evicted from their longtime sanctuary. Her husband’s cremation ashes rest inside in an urn behind the hall’s large gilded statue of the Buddha, just beyond earshot of her prayers.

"I don’t understand the reasons," she said of the dispute, "so I feel really sad."

Inside, Chieu Huynh grimaced and shook his head. "They are welcome here but they don’t want to join us," said Huynh, also 70. "I don’t know what is driving them. This is their will."

On paper, the split focuses on ownership, financial management and daily operations of the temple. A March 2011 eviction notice filed against local temple founders by a California-based conference of Vietnamese Buddhist monks and nuns is headed to trial sometime early next year.

But the schism is more nuanced than court filings reveal. It has built for 15 years, amid rapid growth in Utah’s Vietnamese-born population. It draws on tensions between orthodox and secular flavors of Buddhism and is clouded by a history of Communist repression of Buddhists in Vietnam.

Both sides say earnest attempts to mediate the conflict have failed. The rift is especially uncomfortable for devotees of a spiritual tradition that prizes compassion and eschews discord and harsh words.

Eleven years ago, temple founders signed the property deed over to the monks partly as an offering and partly to end simmering distrust within their own ranks. Now they’ve fallen out with the monastic order and want to take the building back.

Members of the Vietnamese-American Unified Buddhist Congress, meanwhile, say they are gently asserting legal control over the temple as the congress screens its organization for suspected Communist infiltration and tries to bring spiritually wayward congregation leaders into line.

"In my heart, I feel very, very sorry for all the members who have listened to the defendants and went outside," said Kien Tam, a shy, soft-spoken Buddhist nun at Pho Quang temple. She and another nun have been sent to Utah by their San Jose, Calif.-based master, Thich Tri Lang, and are now at the center of the controversy.

"The truth is the truth," Tam said. "And even if we lose, that’s still there."

Many of those targeted for eviction are extended family members and supporters of three original founders: Hoa Vo, Chuc Phan and Thuan Tran, who created an official Utah society of Vietnamese Buddhists in 1993.

The eldest, 79-year-old Chuc Phan, survived 10 years in Communist jails after the U.S.-Vietnamese war and fled to Utah in 1990. These days, the hardened former colonel in the South Vietnamese Army weeps openly over the Pho Quang affair.

"This is our temple," Phan said. "I just want a peaceful place to worship for the rest of my life. I look at the temple as my home. I feel that if I lose it, I will lose everything."

Phan and as many as 100 other congregation members - most first- and second-generation immigrants - have worshipped there since 1996.

Members gradually outfitted the rundown 5,952-square-foot structure with a worship hall, cloisters, meeting rooms and a shrine for ancestral ashes. Their 11 a.m. Sunday services loosely followed the Mahayana tradition in Buddhism, seeking enlightenment for the benefit of all sentient beings.

Two years or so later, the Utah group affiliated with the California-based Buddhist Congress, the American arm of a group based in Vietnam. The congress shares a religious lineage with the Pho Quang Buddhists and its monks began visiting for key holidays such as Vesakha, also known as Buddha’s birthday. They sometimes stayed for months.

The Rose Park members yearned for a live-in monk to guide them. When monks were absent, lay worshippers took over key ceremonial duties. They sometimes invited monks from other Buddhist traditions to visit - moves the congress would later condemn as a breach of religious protocol.

On the surface, the Utah community thrived and its bond with the temple deepened.

New refugees arrived steadily from Vietnam and the Pho Quang temple served as a cultural hub. Immigrants socialized there and took classes on assimilating. Many people interviewed said it was a safe haven as they struggled to settle in America. In time, a U.S.-born generation attended to maintain Vietnamese ways.

"The only place they can get peace, find their culture and love each other is their temple," founder Hoa Vo said.

As the temple’s importance blossomed, its leaders quarrelled, all sides recall.

According to Te Phan, another founder, members grew nervous over the years about key decisions, including an unannounced land sale and ideas for temple upgrades when the mortgage was still owing.

Hoping for harmony, group leaders agreed to donate the deed to the California monastic order, said Te Phan, who split with the Rose Park group and helped establish another temple in West Valley City.

"The congress was a safe place," said Te Phan, who is no relation to Chuc Phan. "It helped us to not be financially worried."

Everyone celebrated the March 24, 2000, deed transfer with a party. The gesture resonated as religious homage honoring the monks and the congregation. According to court filings by the founders, the congress also sought the gift because it improved the order’s financial balance sheet.

Founders Chuch Phan and Hoa Vo insist the transfer included a legal pact amounting to a trust, with a local board of directors charged with managing secular affairs. But ensuing years brought a series of painful disagreements between the congress and local leaders.

The Utahns complained, among other things, that the congress sought expanded fiscal authority while ignoring pleas for a resident monk and refusing to help with financial emergencies. Monks contend the temple was mismanaged, criticizing locals for teaching language classes without a permit and for spending $80,000 on the gate - though locals say it was much less - while the temple building deteriorated and its roof leaked.

Clashes over financial control widened and the congress quietly transferred ownership of the temple in early 2011, to a little known group connected to the head monk Thich Tri Lang, who also oversees the new Lien Hoa Buddhist temple in West Valley City. In a letter, local founders called the transfer an "unbecoming act of secrecy and cover-up."

"Everyone was crying and hurt and felt betrayed," founder Hoa Vo said. And that pain worsened, he said, after the eviction notice appeared on the temple door and the matter landed in court.

Members of the congregation siding with the congress also say they feel wounded, but because the evicted Buddhists have chosen to worship outside and create an embarrassing scene each Sunday. They say the confrontation is being pursued reluctantly and with hopes it will heal.

"The congress does not want to fight but we are seeking clarity," said Kien Khong, one of the nuns at Pho Quang. "If this belongs to them, then we will give it back to them."