by Chelsea Bannach, The Spokesman-Review, February 19, 2012

Spokane, WA (USA) -- There’s a lot more to Buddhism than monks in flowing orange robes who eschew society in the pursuit of the meaning of life. 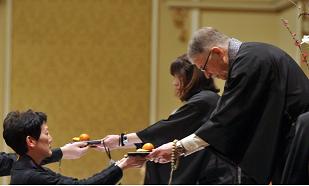 Nearly 300 adherents gathered at the 65th Annual Northwest Buddhist Convention this weekend in Spokane to share the Dharma – the teachings of Buddha.

While most of the participants adhere to the traditions of Japanese Shin Buddhism, the religion has grown to encompass people from many different backgrounds. Adherents are young and old, single or with families – people who live simultaneously in the material and spiritual worlds – all brought together by the Dharma.

So, what is a Buddhist?

“Being Buddhist means being smart,” Bhante Seelawimala, a Theravada Buddhist monk from Sri Lanka, said at a convention workshop. “That simple. To be smart, you need to exercise the mind. You need to meditate.”

He explained being smart embodies truth and compassion; the three are interconnected and dependent on one another.

“The more you’re smart, the more you see the truth,” he said. “The smarter you are, the more caring you become. You cannot be smart without being nice.”

“Because you know as a smart person, if you upset your wife, you’re going to have bad luck,” he joked. The convention, Under Amida’s Umbrella of Compassion, was held at the Davenport Hotel and was organized by a small team of volunteers from the Spokane Buddhist Temple. Each year the event occurs in a different city.

Most in attendance were Buddhists, but some were just curious to learn a little more about the many traditions, beliefs and practices of Buddhism.

One common misconception is that Buddha is worshipped as a God.

“Buddha was a real person,” said Anne Paulin, an event organizer. “He’s not a deity to us.”

The Rev. Don Castro, the supervising minister for the Spokane Buddhist Temple, said the Buddha – a man named Siddhartha Gautama, who taught in the Indian subcontinent sometime between the sixth and fourth centuries B.C. – was a like a doctor. He identified the causes of suffering and prescribed a means to alleviate them by liberating humanity from selfish attachments.

Another misconception is that Buddhism is all about sacrifice and suffering.

Castro said it’s about curing the cause of suffering.

“It’s really symptom, diagnosis, prognosis and cure,” he said. “It would be the equivalent of saying Christianity is all about sin. When you realize the sinful nature of human beings, you’re looking for salvation. In Buddhism, you’re looking for a cure.”

For many in attendance Saturday – and for millions of adherents around the world – Buddhism in its many forms has done just that.

“I think Buddhism really helped me understand better how I fit into the world,” said Paulin, who was raised Catholic. “It gave me peace while I was going through tumultuous times.”