El Monte, California (USA) -- Huddled in darkness, hungry, cramped in a damp and dangerous space in a small fishing boat, Venerable Master Thich Tue Uy sailed on the open sea without food or water for ten days and nights fleeing Communist rule in Vietnam. In his own words, it is a miracle he even survived. 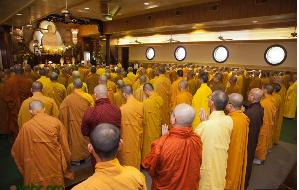 Master Uy, today a Buddhist monk in El Monte, California, escaped Communist Vietnam in 1990. He is one of the so-called, “Boat People,” a group of some 2 million refugees who fled Vietnam from the time of the fall of Saigon in 1976 until the mid-1990s. Approximately 800,000 of those refugees settled in the United States, some 65,000 in Houston.

Many of the “Boat People” are practicing Buddhists, and during their treacherous journey they found comfort and solace calling on Quan Âm, a Buddhist boddhisattva (an enlightened individual who continues to aide humanity) revered throughout Asia as Guanyin, who is believed to be a compassionate mother to all who call on her for help in time of need.

Over the last weekend, over 10,000 Vietnamese Buddhist monks, laity and practitioners – many of them “Boat People” – came to southwest Houston’s Vietnamese Buddhist Center to celebrate the annual Quan Âm Festival at the feet of what is claimed to be the largest Quan Âm statue in the Western Hemisphere.

“We come here to honor Quan Âm who rescued us and helped us,” said Master Uy, who was one of the 250 plus monks in attendance from all over North America.

“We came to America with empty hands, depressed, stressed and with no heart,” he said, “Quan Âm gave us freedom, strength and hope even when everything seemed hopeless; now we give her thanks.”

This year’s 11th annual Quan Âm Festival and Day of Pilgrimage at the Vietnamese Buddhist Center on Synott Rd. was held over two days, Friday March 30th and Saturday March 31st. The center organizes the celebration each year in order to continue the Vietnamese tradition of pilgrimage to honor Quan Âm and pray for peace. Each year the Center hosts thousands of monks, nuns and Buddhists from all over the world.

“Knowing that Quan Âm brought us all to safety, we now dedicate this celebration to her in our second home – the United States,” said Tu.

Tu emphasized, “there are many temptations, distractions and difficulties here, but we always must return to Quan Âm.”

While the majority of volunteers and attendees are “Boat People,” there is a burgeoning youth component in the festival. Indeed, that is one of the prime reasons the festival continues to grow. Organizers said that events like these are a way to pass on culture and religion to the next generation of Vietnamese Americans.

“The older generation is trying hard to pass on our tradition and devotion,” said Tu, “that is our responsibility to Vietnamese Buddhists growing up in America.”

Elder Vietnamese Buddhists believe that the only way to remain distinctly Vietnamese and Buddhist in North America, or to understand that culture, is to delve into the world of Buddhism and devotion to Quan Âm.

There is also hope that those outside the Vietnamese Buddhist community can come to appreciate this distinct expression of Buddhism and Asian culture.

No matter the peripheral benefits of the celebration, the annual Houston festival continues to maintain its prime purpose – to provide a pathway for continued pilgrimage and devotion in honor of the bodhisattva, the Compassionate Mother, Quan Âm.

Although the setting is different and the temptations have transformed with the migration, Quan Âm is who Vietnamese Buddhists in the United States continue to turn to for help.

That is why it is written in one of their devotional books, “With mindfulness, free from doubts, in moments of danger and affliction, our faith in Quan Âm is where we go for refuge.”