Buddhists mix the spiritual and mundane

San Diego, CA (USA) -- Finding the Metta Forest Buddhist Monastery near San Diego is not as difficult as finding enlightenment, but it's still no easy task. 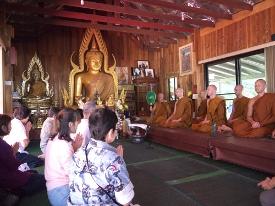 Cradled in the hilly avocado orchards near Valley Center, Calif., the monastery blends in easily with the colors and landscape of the area. If you weren't looking for it, you'd miss it.

I suspect one reason the place is so difficult to pinpoint is the eight monks there aren't interested in getting pinpointed.

It's an earthy place with sleeping "slabs" scattered around beneath the trees. There is a large golden statue of the Buddha in the main compound, along with other religious symbols.

But the spiritual aspects and icons are mixed and matched together with the ho-hum necessities of daily living — a great bale of toilet tissue here, a broom, eating utensils and dish soap there.

That's something I've always liked about Buddhism: the way the religion stirs together the spiritual and the mundane.

A recent Buddhist best seller is called "After Enlightenment, the Laundry." And Buddhist poets often spin the divine together with the daily grind.

Historically, Buddhist monks have performed simple manual acts of labor to create a space inside themselves for spiritual awakening. The carefully groomed pebble gardens in Kyoto, Japan, are just one example.

So it was at the Metta Forest Monastery. I could not tell who was a religious disciple there and who was simply a gardener or avocado picker.

(By the way, it seemed appropriate the monastery was in an avocado orchard. The avocado is an ancient Aztec symbol for "love." They grow in pairs, like two people in love drawing nourishment from the tree of life.)

Buddhists, at their best, have a sweetness and compassion about them that is unrivaled. I suspect monks at Metta Forest and other monasteries take their cue from the Buddhist aphorism, "Walk as if your feet were kissing the earth."

I didn't stay as long as I wanted to stay at the monastery.

Like the fellow in the Robert Frost poem, the groves were "lovely, dark and deep" but "I had promises to keep."

I did take with me some of the tranquility that comes from slowing down and spending a little time "off the grid," however.

And I took a renewed respect for Buddhism and its ways.Albert Einstein claimed that Buddhism seemed — to him — to be the one religion compatible with science.

I don't know if that's true.

I do know it's a religion that's wonderfully compatible with avocados, and with the messy lives we lead.

And for a short spell in the hills outside of San Diego, it was a religion compatible with me.