Berkeley, CA (USA) -- Dharma College opened its doors for the first time this weekend, marking the completion of a set of four Buddhist-inspired sister organizations in Downtown Berkeley. 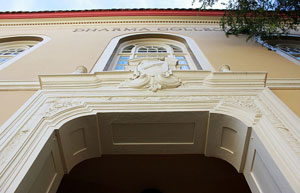 << The Dharma School held a ribbon cutting ceremony this past weekend, and classes will start on October 3rd.

The Buddhist-inspired educational center - located on 2222 Harold Way - held an open house event on Saturday to publicize its fall classes to prospective adult students. The organization is offering three courses that will begin Oct. 3 and run for six weeks, where students will study the mental state in an interactive learning environment.

“The process of teaching and studying is going to be our own experiment,” said Dharma College co-director Robin Caton.

Inspiration for the curriculum comes largely from Tarthang Tulku Rinpoche - a Buddhist refugee who left Tibet in 1959 and settled in Berkeley in 1969, and then established the Tibetan Nyingma Institute in Berkeley in 1972. Though Rinpoche no longer resides in Berkeley, he is still noted as the founder of the sister organizations on the block.

“It’s all about bringing people Downtown - whether it’s (for) arts, culture, shopping, commerce - and then staying Downtown,” said John Caner, CEO of the Downtown Berkeley Association, who attended the organization’s ribbon-cutting event on Friday. “The idea is that you come down to have class at Dharma and then you have lunch or dinner, or go to a show.”

The Mangalam Research Center for Buddhist Languages was the first to inhabit the block in 2008, followed by Tibetan Aid Project and Dharma Publishing Bookstore. Though these sister organizations were not founded together, they have a similar mission and hope to collaborate with Dharma College in the future, Caton said.

As part of the Downtown Area Plan, the opening of Dharma College is one in a series of business renovations and openings in recent years. The plan seeks to revitalize the area economically to increase traffic and sustainability.

Being both a teaching center and a business, Dharma College has joined the Berkeley Chamber of Commerce, which will help the center as it progresses.

Dorothee Mitrani-Bell, owner of the recently opened Cafe Clem across the street from the Buddhist center, said she chose the location partially for the surrounding area.

“I like the neighborhood - I feel like it’s a great community,” Mitrani-Bell said. “I’ve been in the community working with my other business for 15 years, so this is sort of a really nice extension of it.”