Spokane, WA (USA) -- Next Saturday, a flock of Buddhist nuns – with their bright smiles, maroon and ochre robes, and shaved heads – will head to Spokane for a celebration. 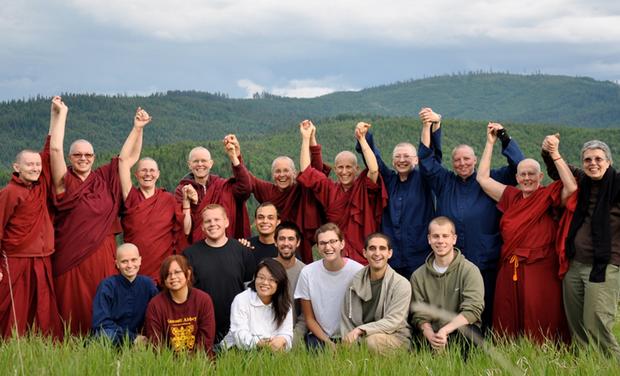 These rare birds of the Inland Northwest are known as bhikkhunis: Women who’ve shed their former selves to become fully ordained Buddhist nuns. And their home, Sravasti Abbey, is nested in the mountains of Newport, 50 miles outside of Spokane.

They’ll join the community of Spokane and fellow monastics in celebrating the Second International Bhikkhuni Day at the Universal Unitarian Church in Spokane. Sravasti Abbey is rare – it’s one of the only communities of fully ordained Buddhist nuns in the country. The event on Sept. 29 will honor these women and their efforts in ordination.

As monastic life has called for, these nuns have shaved their heads and donned traditional robes to pursue a life of asceticism, ritual meditation, prayer and good works. “By their example of renunciation,” Conover said, “and choosing to live without worldly comforts, they remind us of what’s important in life.”

Today there are six fully ordained nuns and six novices at the abbey. Currently, there are only ordained women at Sravasti. But the abbey welcomes men to come and train. Venerable Thubten Chodron, the founder and abbess at Sravasti, was ordained in 1977 and studied with the Dalai Lama.

“By taking ordination,” Chodron said, “we assume the responsibility to continue the Buddha’s teachings in the same complete way that they have been passed down to us.” Out of her own desire to continue the teachings, Chodron founded Sravasti Abbey in 2003. It’s one of the first monasteries in the U.S. to train monastics in the Tibetan tradition.

Chodron emphasizes the continued need for monastics. “The world needs people whose job it is to live in ethical conduct, cultivate love and compassion for all beings … and guide others in the cultivation of these qualities.”

While female monastics, known as bhikkhunis (or bhikshunis, depending on the tradition), are rare in this region, they’re needed, she says. “Since women are half of the world’s population, their leadership in this area is important,” Chodron said.

Next Saturday’s celebration includes a workshop on compassion and the roles of women in spiritual leadership, guided meditations and a talk with Chodron.

For more on the Alliance for Bhikkhunis visit: www.bhikkhuni.net