PATASKALA, CA (USA) -- Plans for a Buddhist temple in the city remain on hold because of fundraising challenges. 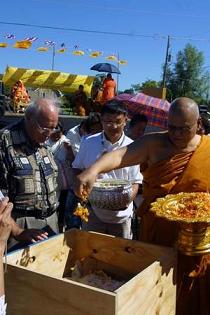 << H. Burkeley Showe, left, a Columbus-area developer, watches as Phra Bhrommooee, abbot of Wat Pichayayatikaram in Thailand, takes part in a 2011 brick-laying ceremony on the future site of a Buddhist temple. Showe donated acreage on Blacks Road to build the temple. Supporters initially wanted to break ground in 2012, but fundraising difficulties have delayed the project. / Chad Klimack/The Advocate

A member of the group who has spent three years working to build a Thai Buddhist temple on the south side of Blacks Road, between Township and Watkins Roads, said the economic downturn, both in this country and in Southeast Asia, has hampered fundraising efforts.

“We can’t get any money,” said Susan Lee, a Columbus resident who belongs to a nonprofit group, the Columbus Buddhism Center, that first announced plans for the temple in 2009.

John Tai, the group’s president, could not be reached for comment, but Lee said the fundraising woes have not prompted the group to abandon the project.

“It’s not that we don’t want to do it, but the economy is tight right now,” Lee said. “Right now, the project is still going on.”

Lee, Tai and nine Buddhist monks had a brick-laying ceremony at the proposed site of the temple in late August 2011. At the time, the site consisted of a soybean field.

It remains farmland today, and city officials have not received any formal development plans from the group, which must submit the plans before breaking ground.

Tai said in 2011 the group needed to raise $1 million to $1.2 million to complete the first phase of the project, a residence hall/rectory for the monks.

The property is zoned for residential uses, so Tai and the group would not need to seek rezoning to build the living quarters.

They also would not need rezoning to build the next phase of the project, the temple itself. That phase, Tai said in 2011, could cost another $10 million to $12illion.

Lee said the group has struggled to raise money locally, and that has prompted Tai to travel to Thailand three to four times this year in an effort to raise money there. Like here, Lee said Thailand is working to recover from economic troubles of its own, and that has made fundraising there similarly difficult.

Plans the group submitted in 2011 called for breaking the project into three areas. One of the areas, on the south side of the site, would consist of the rectory, an administrative building and dwelling units for monks, all surrounded by serene landscape settings.

Another area, in the middle of the site, would consist of a chapel and a building that would house a library and museum, in addition to buildings used for meditation teaching and practicing.

The third area, located in the north corner of the site, would consist of a plaza, courtyards and a community meeting hall.

Developer H. Burkeley Showe and his family donated more than 7 acres to build the temple. Showe attended the 2011 brick-laying ceremony, in addition to another ceremony at the site in 2010.

Tai has discussed building a floating Oriental market, restaurant, spa and hotel on the grounds, and in 2011, he said he would like people to be able to come to the site to learn Thai dance and martial arts, among other Thai- and Buddhist-based offerings.

“We want to do this and then bigger things, like an international farmers market with vendors from other countries,” Tai told The Advocate in 2011.

City officials, including Mayor Steve Butcher, have said the temple, if it is ever built, could be a boon to the city, attracting tourists from across the region and country.

Still, some residents and representatives from local churches approached Pataskala City Council to express opposition to the center. That, in turn, prompted the Pataskala campus of Central Ohio Technical College’s Lifelong Learning Institute to hold a panel discussion on Buddhism in early 2012. Everyone from a Buddhist monk to a Catholic nun to Tai answered questions from nearly 100 local residents about Buddhism and the project.

Tai told residents at the time that the group would like to start construction in May 2012. With that date now passed, Lee said the group now hopes to break ground sometime in 2013.