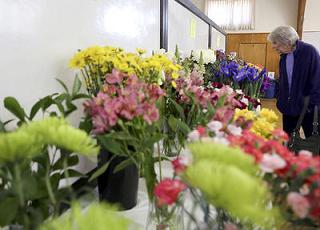 << Rosellen Mastoris of Watsonville stops to smell the flowers as she browses through the Flower Festival displays at the Watsonville Buddhist Temple on Sunday morning. (Kevin Johnson/Sentinel)

Siddhartha Gautama was born in what is now Nepal on April 8, 566 B.C., festival organizer Perry Yoshida told the crowd at the start of the festival, which ran from 11:30 a.m. to 2 p.m.

The local celebration brought springtime joy to the temple near Riverside Drive and Bridge Street near the ball fields behind Watsonville High School.

Yoshida said they were expecting between 300 and 400 visitors for an event that is part outreach, involving temple members making and selling food and other items, including fresh produce.

Food and flowers brightened up the temple's gathering hall and festival attendees lined up to scoop up bundles of both. They also milled about displays of floral arrangements, handmade dolls, and scrap books showing local Japanese and temple history. Others watched demonstrations on stage, including a demonstration by Salinas Kendo Dojo.

Also on display was a floral altar, or hanamido, that represents Buddha's birthplace, Yoshida said.

He said the special altar holds a festival allure and "allows us to express our respect and reverence toward the Buddha and his teachings."

In the temple, the Rev. Shousei Hanayama discussed the meaning of the festival after giving a tour. The temple was lushly adorned with bright flowers and gilded fixtures, as well as

candles, scroll-like artwork on the walls and more.
At one point, Hanayama told those gathered that life is fragile -- "one crazy person and we might die" -- and he said to enjoy the festival offerings and life in general.

Watsonville Buddhist Temple is 170 years old and was moved to its current location after World War II, he said.

During a question-and-answer period, Fran Marshall of Santa Cruz said her mother told her that the Japanese-American internment was in part due to jealousy in those who had seen Japanese immigrants making "fruitful, lovely land" in the area.

"They had three days to move out; it was a land grab," she said.

Hanayama acknowledged the envy and greed and discrimination in the world.

"We have discrimination; everyone has it," he said. "If you don't accept that in your mind, you can't solve that problem."

Later, he said the temple is open to all and that "everyone has damage to overcome."

After his short talk, a warm and smiling Hanayama said it was all going pretty well. He said that they had prepared for days.

Tao said he enjoyed the food the most, especially the sushi, sesame salad and chicken.

Nearby, Dennis and Lola Hamada were walking his 91-year-old mother, Michiko, to the car.

"The festival is coming along just fine, with all the displays and the food," said Dennis Hamada, who grew up in Watsonville and now lives in Belmont. "Part of it is social, too. I wish we could stay longer. But my mom is tired, and her baseball game is on.

"But every week there is something going on; it's part of the fun."