San Gabriel, CA (USA) -- He may not mean to, but Bowala Rakkitha stands out among his fellow students at Mt. San Antonio College. He dresses differently, his values are unusual, and he speaks with a distinctive accent. 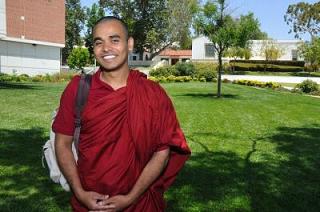 When the Venerable Rakkitha, a Buddhist monk from Sri Lanka, walked at graduation last week during Mt. SAC's 67th commencement, it was to be yet another leg of a most improbable journey.

During his time as a student at Mt. SAC, Rakkitha has generated a certain amount of curiosity, if not celebrity. The first question is usually related to the most obvious distinction.

"Everyone wants to know why I dress like this," he said, patting down his red robe, his day-to-day attire and more importantly a symbol of the vow he made to live a simple life as monk. Then there are the more curious peers.

"I have also frequently had groups of student who wish to interview me about Buddhism and about pursuing secular learning," he said. "Although I feel that my English may not be very good, I share my experiences with others and I let them know that I am learning alongside them."

Rakkitha's journey began in Sri Lanka where he was raised while the country was in the midst of a civil war. He decided to become a monk at 14 to help the people in his community.

And because the war closed down most schools, the temple was the one place to get an education. He went on to earn two college degrees in Sri Lanka.

He came to the U.S. in 2005 to help a fellow monk at the Landarama Siri Lankarama Meditation Center in La Puente, his current home. He teaches the equivalent of Sunday school and helps out in a drug and alcohol rehabilitation program.

"When I was growing up in Sri Lanka, I really couldn't imagine coming to the United States," he said. "It was just unthinkable."

Once here, Rakkitha worked at the La Puente temple. He registered Mt. SAC in 2009 to learn English after temple members encouraged him to enroll.

"The devotees at our temple always talked about Mt. SAC and after a few years here, I thought I better learn English."

But the vow to live a religious life and renounce the materialism of society hasn't always fit neatly into his new world.

"It's not easy to be a Buddhist monk. You have to make a lot of sacrifices and give up a lot," he said.

For example, the monastic rule that allows breakfast and lunch, but no food between noon and dusk could be problematic for a student who takes classes from morning to noon. Then there are the conflicts with the gadgets of the modern age that can make being a monk in a material world difficult. Learning to drive was a major hurdle.

"I have no attachments to conveniences like air conditioning or computers or cell phones. I could give them up at any time," he said. "Rather, they enable me in my work. Having a computer is helpful for temple work as well as school work."

Buddhism, he said, realizes that change is inevitable and is flexible in some regards.

"I feel as though I have to regularly justify my educational goals to myself and to others," he said.

While many students naturally may think of their education and earning a diploma in terms of future financial gain, Rakkitha thinks of it much differently. He justifies his pursuit of education in terms of how it will help others.

"I will use the knowledge I've gained here to help with my work in the community as a Buddhist monk."

When he transfers to UCLA in the fall, Rakkitha plans to pursue a bachelor's degree in religious studies and to teach. He already has a bachelor's in Buddhist culture from Sri Lanka's University of Peradeniya and a national diploma in teaching from the Sariputtha National College of Education.

"I feel the necessity to develop a wider range of religion education, especially living in such a diverse country."

So when the Ven. Bowala Rakkitha graduates with Mt. SAC's Class of 2013 on June 14, he'll have one more leg of his journey completed and be one step closer to his goal.