Ukiah, CA (USA) -- A historic seven-building, 5-acre complex that has sat vacant in the center of Ukiah’s west side residential neighborhood for almost five years is on the verge of getting a new lease on life from the Dharma Realm Buddhist Association. 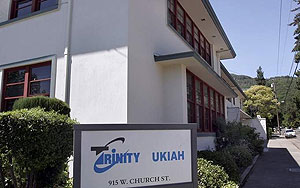 << The former Trinity Youth Services school in Ukiah has been closed since 2009. (PD file)

The group’s purchase of the former orphanage is in escrow, said David Rounds, who sits on the Association’s board of directors. The Association owns The Sagely City of Ten Thousand Buddhas, an internationally known spiritual and educational center located on about 700 acres in Talmage, just east of Ukiah.

Rounds said the Association plans to expand the Talmage center’s university into the downtown complex, a onetime orphanage and boarding school run by Dominican nuns. Most recently, the property was used as a boarding school for troubled youth, Trinity Youth Services.

Rounds declined to give further details of the Buddhist association’s new project, saying the plans remain in flux.

City officials were pleased by the news.

“The City of Ten Thousand Buddhas has shown themselves to be inclusive, respectful and engaged with the community. I’m excited about the possibilities of what their presence closer to town could mean for both of us,” said Ukiah City Councilwoman Mary Anne Landis.

The Dharma Realm Buddhist Association was founded in the United States in 1959 by the Venerable Master Hsuan Hua, according to a history compiled by the organization.

The Association is dedicated to translating Buddhist canon, propagating orthodox Dharma, promoting ethical education and “bringing benefit and happiness to all beings,” according to the Association’s website.

Master Hua, who believed that a good education is crucial to saving the world, soon established the Instilling Goodness Elementary School, followed by the Developing Virtue Secondary School and the Dharma Realm Buddhist University.

The schools have both local students and international students, some whom reside on the campus. In addition to required academic curriculum, the schools offer Chinese language classes and have an emphasis on moral and spiritual development.

The Talmage center also hosts cultural events, seminars and spiritual retreat and has a vegetarian restaurant and a bookstore.

The downtown property the Association is buying also has a rich history.

It was constructed as a Dominican convent in 1883, according to a history compiled by Judy Pruden, a Ukiah historian and planning commissioner. In 1903, the nuns of the Sacred Heart convent started a day school for Catholic children. They opened an orphanage, the Albertinum, for boys in 1904. It was expanded to include girls in 1923, Pruden said.

The Dominicans sold the property to the Greek Orthodox church, which converted it to a home for troubled youth.

The current owners, Colton-based Trinity Youth Services, purchased the property in about 1984.

The parties did not disclose the selling price but the most recent asking price was $3.75 million, McNamara said. It originally was $5.4 million, she said.