OAKLAND, CA (USA) -- A small gesture is making a big impact on one Oakland neighborhood. 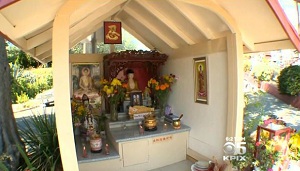 When a blocked off street at 11th Avenue and 19th Street in Oakland became a magnet for drug sales and illegal dumping, one neighbor had an inspired idea: he bought a small Buddha statue at an Ace Hardware and placed it in the median.

And miraculously as the structure grew, crime and blight began disappearing and neighbors who don’t speak the same language became connected.

So when the city decided this was a danger that should be removed, it got a unified response.

“We all worked with the city and were like ‘you better not tear this down, this is something that’s part of our space,'” said neighbor Christina Moicillo.

So far the city has shown an inspired wisdom by allowing the temple to remain.

“It’s people taking initiative and cleaning up our own space,” said Moicillo. “We’re doing it. It’s well-protected …. it’s part of our community now.”

Ironically, the statue was placed by a neighbor who does not practice Buddhism but thought it would help beautify the neighborhood.