KAPAA, Hawaii (USA) -- The Rev. Soryu Kagahi conducted the first Jodo Shinshu Buddhist service in the Hawaii Kingdom on March 3, 1889, at the Kojima Hotel located at No. 1 Beretania St. on Oahu. 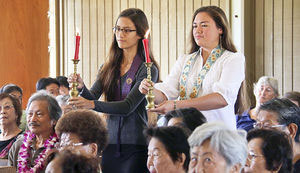 Kagahi, a minister from Kyushu, Japan, came to Hawaii to offer spiritual support to the thousands of Japanese people who had migrated to the islands to labor on the sugar plantations.

“Congratulations should go to you, the people, and all of the ministers, past and present, who have perpetuated Shin Buddhism,” Matsumoto said. “It is because of you that we brought the service here instead of asking you to come over to Honolulu.”

The Rev. Kazunori Takahashi of the Lihue Hongwanji Mission, in delivering the message from the Zen-Monsama, said the Buddhist priests helped the Japanese immigrants survive the severe labor conditions of plantation life and the post-World War II anti-Japanese sentiment, and continue in the now global Buddhist society.

When the first Buddhist ministers arrived, they brought the Buddha’s messages of non-violence, self-reflection and peaceful cooperation to the immigrant workers. They also assisted them with letter writing, arranging marriages, mediating family and community disputes, conducting funeral and memorial services, caring for orphans and arbitrating labor and management conflicts.

Melia Okura, a leader of the Junior Young Buddhists of America and a student at Waimea High School, said Sunday was a very good day to celebrate 125 years of “a great lifestyle.”

Citing the impermanent nature of life and the nature of change, Okura compared Buddhism to the dinosaurs.

“Buddhism, like the dinosaurs, has traveled far from its origins,” Okura said. “It has been assimilated into the different cultures it met along its travels, but still maintains its original core values. This is all part of the preservation of Buddhism.”

Brandi Yamamoto, who came home from Honolulu for the commemorative service, said she has always been a Buddhist.

“People refer to Buddhism as a religion,” Yamamoto said. “But I learned that I can go out and do what I want to do, and if I want to, always return to Buddhism. It’s a lifestyle.”

After the first service conducted by Kagahi, it was not until 1900 when the first temple, a two-story wooden structure on Fort Lane, Oahu, was dedicated. The developing temple was used to help relieve suffering of victims of the tragic Chinatown bubonic plague fire. The temple was dedicated on Nov. 20, 1900.

The Jodo Shinshu practice is based on its founder, Shinran Shonin, whose definition of freedom is to be free from bondages to the claims of egocentric desires and emotions.

The Honpa Hongwanji Mission of Hawaii has worked with the community, through its network of temples, to create Hawaii Peace Day, Buddha Day and other community projects such as Project Dana and the Hawaii Living Treasures.