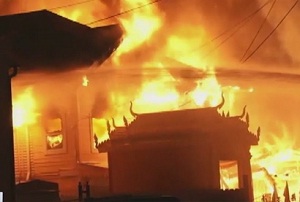 The candles were part of a traditional Buddhist new year's celebration.

Firefighters responded to an emergency call around 2 a.m. Tuesday, about a fire at the Oakland Cambodian

Buddhist Temple on East 10th Street and 52nd Avenue. Flames quickly spread to an unoccupied house on the back of the property, and to the house next door. A total of

18 people were forced out by the flames, including several monks who live at the temple. Three people suffered minor injuries.

A monk tells KTVU Fox 2 reporter Alex Savidge, that they will rebuild. Asked if he was upset, the monk said, "this is how life is."