RIVERSIDE, Calif. (USA) -- Early in the 20th century Buddhist monastics in Mongolia and Tibet engaged with European and Slavic intellectuals, exchanges that reframed the study of Buddhism and Inner Asia and continue to influence scholars today. 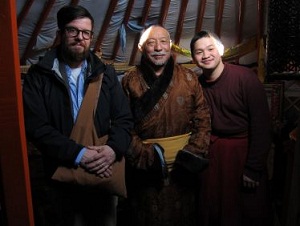 << Matthew King (left) poses for a photo with two  lamas in a yurt temple outside Ulaanbaatar, Mongolia, after a ceremony for local herders during Lunar New Year celebrations in February.

Matthew King, assistant professor of religious studies at the University of California, Riverside, has been awarded a $37,500 grant from the Social Science Research Council to study Eurasian “interpretative communities” that brought Buddhist literati from the Mongol steppe and the Himalayan plateau together with European and Slavic scholars researching topics like Buddhist history and Altaic ethnology. (The Altaic language group is named after the Altai Mountains of Central Asia.)

The Social Science Research Council is a New York-based, independent, nonprofit organization dedicated to advancing research in the social sciences and related disciplines. The InterAsia Program Transregional Research Junior Scholar Fellowship King received aims to strengthen the understanding of “issues and geographies that do not fit neatly into existing divisions of academia or the world and to develop new approaches, practices, and opportunities in international, regional, and area studies.” Funded by the Andrew W. Mellon Foundation, these fellowships help junior scholars complete first books or undertake second projects.

The grant will enable King to spend four months this year in Mongolia, where he will work in the archives of the National Library of Mongolia and Gadantegchinlen Monastery. King will examine thousands of pages written by four monastic and revolutionary intellectuals, as well as the works of Euro-Russian intellectuals and the archive of The New Mirror, a secular newspaper published in the Khalkha dialect during the imperial-socialist transition. The paper featured lively debates between progressive and conservative monks, scientists and revolutionaries from across Eurasia on issues as diverse as the paleography of Turkish burial mounds, Copernican views of a round earth, the potential of scientific education for a reformed monastic curricula, and the defining features of a “national” pan-Mongol Buddhism.

King’s project – “The Old Empire and the New Reasoning: Interpretative Communities Between the European Academy and the Buddhist Monastery in Revolutionary Inner Asia (1911-1940) – will examine what he calls Eurasian “interpretative communities” and will involve key figures such as Mikhail Tubyansky, a Russian scholar of Asian literature and member of the Bakhtin Circle (an influential school of thought that addressed literary, philosophical and religious issues in light of the Russian Revolution and the Stalinist era), and the Thirteenth Dalai Lama.

“This was a time of clashing Russian, British, Japanese, and Chinese claims on dispersed Mongolian and Tibetan cultural areas and of regional constitutional and socialist revolutions that give us the Inner Asia we know today,” he explained.

In Europe and Russia (but also Japan and China, though this is outside the scope of King’s study), “this was also a time of emergent academic and popular scrutiny of, among other things, the ‘world religion’ of Buddhism, Tibeto-Mongolian folkways, and Altaic linguistics. This was a time of Qing and Tsarist imperial collapse, the rise of regional nationalist movements, the uneven consolidation of state socialism, and eventually, the terrible exercise of state violence in mass purges of Buddhist monastics and monastic institutions,” King added.

King joined the UCR Department of Religious Studies in 2014. His research interests include: Buddhist movements during the imperial-socialist transition in Tibetan and Mongolian cultural regions; Buddhism, science, and secularism in Inner Asia; Buddhist economics; and the global circulation of knowledge about Buddhism and Buddhist peoples. His articles have appeared in journals such as the Journal of the American Academy of Religion and History & Anthropology. He has also contributed chapters to recent volumes on Inner Asia published by Brill, Oxford, and Routledge. He holds bachelors, master’s and doctoral degrees from the University of Toronto.