Boise, Idaho (USA) -- The Vietnamese community now has a place to worship - a brand new temple. The Linh Thuu Temple started in a three-room house on Overland Road back in 1992 to serve the hundreds of Vietnamese immigrants following the Vietnam War. 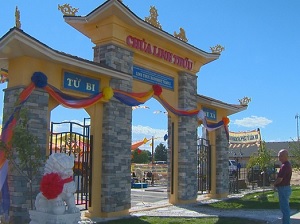 << It was a day of celebration for the local Vietnamese community as they opened a brand new temple in Boise.

"The Vietnamese community now has a place they can call their own community center as well as a place for socializing and a place to get in touch with their heritage," said Dan Black with the Treasure Valley Dharma Friends.

It's that heritage that the Vietnamese community hopes to preserve through this new temple - located near the corner of Overland and Maple Grove roads - which boasts an open prayer space as well as an ancestral hall that honors past generations.

"It's really important for young people as they grow up to know where they have come from and to have a sense of cultural identity," said Black.

Preserving that cultural identity is something Long Trinh says will be easier at the new location.

"I was born in Vietnam," said Trinh. "I lived there for 13 years and I came in 1975 since the fall of Saigon. The younger generation grows up and they start losing their own ancestral languages, so we want to keep that tradition going on and to carry on."

"They are really connecting their parents and their generation with the modern day kids and they're sort of living in two worlds," said Black.

Many of the families that go to this temple have roots in Vietnam, but have found refuge in Boise.

"Boise happened to be one of the locations where the Vietnamese came and there was support," said Black.

Thich Nu Dong Hanh, a nun at Linh Thuu, came to the United States in 2005.

"I love living and being a citizen in a new country," said Hanh.

She went on to say that no matter where she lives, she will teach her religion, but loves that in America she can do so freely.

Services will continue to be held on Sundays at 11 a.m. The temple is located at 8813 Ardene Street in Boise.
TOP