An open house for a new Thai Buddhist temple in Ogden drew hundreds of visitors and monks from around the country.

OGDEN, Utah (USA) -- An open house for a new Thai Buddhist temple in Ogden drew hundreds of visitors and monks from around the country. 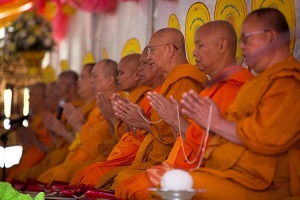 << Thai Buddhist monks pray during the 80th birthday celebration for Phra Thepbuddhivides at the Wat Chaimongkolvararam temple on Sunday, Oct. 1, 2017. Thepbuddhivides is the president of the Thai Bhikkhus order of monks who serve at the temple. (Benjamin Zack/Standard-Examiner via AP) The Associated Press

The Standard-Examiner in Ogden reports (http://bit.ly/2ykNKnm ) that monks attached gold leafs to stone balls and chanted Sunday at the opening of the Thai Wat Chaimongkolvararam temple.

It took 11 years to build the temple because they relied on donations to fund the project. There are also plans to build a museum and meditation center nearby.

Phet Grover, who will worship at the temple, called it a personal oasis. Grover is originally from Laos, a neighboring country to Thailand. She said she was excited to see people from all over, including California and Florida, come to the opening.

Visitors for the opening included Buddhists and non-Buddhists.
TOP