Creating in the Buddhist tradition of impermanence

WASHINGTON, USA  -- A red square tabletop lay in the center of the room. Eight red- and gold-clad monks sat cross-legged on flat, square cushions, chanting a prayer for the success of the religious and artistic creation. 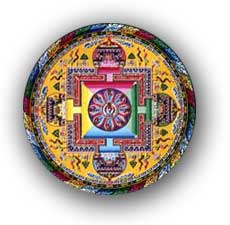 Within 48 hours, the geometric, colored sand painting that took an entire day to create would be destroyed - all part of Buddhist tradition of impermanence.

The monks of Mindroling Monastery in India were here to create a Red Tara Sand Mandala, a sacred type of artwork said to help defeat fears and obstacles. The monks and the International Campaign for Tibet hope the Mandala will help the Dalai Lama when he visits in November.

A large Buddha presided on the wall. Below, two vases of flowers sat on either side of five silver bowls of colored sand: red, blue, yellow, white and green.

Prayers over, it was time for tea and the actual construction.

Six monks, four specially trained to create Mandalas, surrounded the red board as one with a T square and another with a simple ruler determined the board's center. A chalk snap-line was next, and the monks halved the board first one way and then the other.

Another monk pulled out a compass, and after adjusting it to the correct angle, marked off the proper distances from the center. Each inch of the sides of the board was painstakingly marked.

The chalk line accidentally swept against the board, and a fifth monk carefully rubbed the extra line out with his finger.

The monks used the chalk snap-line again, slowly lining up the string with the 1-inch marks and snapping a white line into place on the board. Every five or six snaps, they ran the line back through the cloth chalk bag. White stripes, and then, 1-inch squares covered the board.

The creation of the Red Tara Sand Mandala is a sacred and exacting process. The Red Tara symbolizes a female energy and is especially significant for the 14th Dalai Lama.

Ella Waide, 4, watched the proceedings with her mother, Unyong, 45, and 8-year-old sister, Zoe. They came from Arlington, Va., to show their support for Tibet and because Unyong, a yoga instructor, wanted her daughters to see the creation of a Mandala, an unusual opportunity because monks rarely create them in public.

"They did pretty good, Mom," Ella whispered to her mom. Waide stifled a laugh and nodded solemnly in agreement.

By 3:30 p.m., when a single monk reached for the red sand and a hammered-metal tube, they had been working for almost 4-1/2 hours.

Colored grains of sand trickled out the ends of the tubes as the other monks joined in slowly filling in their drawing.

An hour and a half later, the four monks had almost finished the center square foot, a flower surrounded by geometric shapes.

The Mandala was created in honor of the Dalai Lama's 70th birthday in July as well as his forthcoming trip to Washington, said Kate Saunders, the ICT communications director.

"We hope to help create a good atmosphere for his visit and for moving the leaders in China," she said.

Saunders said the Dalai Lama's visit is significant as he will be meeting with scientists and politicians in addition to giving a public talk.

"We hope he will be meeting with President Bush," she said. "They have already met, and (Bush) has been very conscientious in raising the issue of Tibet and encouraging the Chinese to dialogue with Tibet."

The Dalai Lama works to spread a message of peace and conciliation through dialogue and not through violence, Saunders said.

The finished Mandala existed for less than 24 hours before the sand was swept up Wednesday night. The sand, which traditionally is thrown into a body of water or disposed of in some other way, was bagged and given to those in attendance as a commemoration of the event.

Zoe was impressed with the transience of the sand artwork.

"You know, you're right," she told her mom. "Nothing lasts forever."