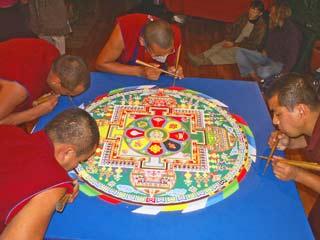 << Visiting Buddhist monks from the Gaden Shartse monastery in India create a sand mandala during their recent three day visit to Mount Shasta. The mandala was destroyed in upholding the Buddha's last words of, "All things are impermanent, work out your salvation with diligence."

The monks are on a nationwide Sacred Earth and Healing Arts of Tibet Tour. The purpose of the tour is to support the monastery's teacher salaries, textbooks, monastery expenses and the improvement of soil for farm sustainability.

At Mount Shasta City Park on Thursday, the monks performed rituals and "practices," played music and answered questions from the audience.

Practices include a variety of actions including meditation, dance, music and debate that bring a better understanding of the Buddha's teachings.

"We want to bring awareness and a new humanity of love, caring and compassion," Phuntsho said.

Phuntsho said the core study program at the monastery takes 24 years to complete.

"That is only memorizing five volumes of the Buddha's teaching," Phuntsho said. "There are 84,000 volumes. One lifetime is not enough. It takes many, many lives."

Phuntsho said there are monks who have memorized all 84,000 texts.

He said the purpose of the memorization is so the Buddha's teachings, "Shine in your mind."

Phuntsho said he has been a monk for 20 years and is "never in a hurry."

"Do your best to benefit people," Phuntsho said.

Phuntsho said the monastery, founded in the 15th century in Tibet, suffered after the 1950 Chinese invasion and occupation.

"One hundred and eighty monks out the five thousand survived to found the monastery in India," Phuntsho said. "The Chinese killed two million people."

Phuntsho said the monks are "working hard" to become self sufficient.

'The crops are protein deficient so we have to supplement," Phuntsho said.

During Friday's event, Buddhist music, rituals and practices were performed, all having a specific purpose toward understanding and practicing Buddhism.

The music included eight monks playing long and short horns, bells and symbols, along with deep bass chanting that rolled powerfully through the room.

The Yak dance, with two monks cavorting in a Yak costume, was performed to honor the Yak that provides food, clothing and shelter for Tibetan people.

"And just for fun," Phuntsho said.

A raucous demonstration of monks debating and challenging an elder's beliefs had the monks shouting, pushing each other, loudly clapping hands and otherwise trying to shake the elder's position.

Phuntsho said the purpose of the debates is to make sure beliefs and understanding of the Buddha's teachings are founded in irrefutable logic and reason.

Phuntsho briefly spoke on Buddhist beliefs that say the sense of self is an illusion.

"Me or I doesn't exist," Phuntsho said.

He also spoke on the practice of proper motivation, proper action and proper dedication.

"You must have all three or your action is incomplete," Phuntsho said.

"Without proper dedication," Phuntsho said, "it is like putting a drop of water in a desert where it disappears, as opposed to putting the drop in the ocean where it always remains part of he ocean."

In closing remarks, Phuntsho said compassion and doing benefit for other beings is the highest calling.

"We all have to work on it," Phuntsho said. "It's never too late to practice."

During the three day visit a sand mandala was created with multicolored grains of sand and other materials laid down on a table a few grains at a time.

The mandala was destroyed in a Dissolution Ceremony Friday to uphold the Buddha's last words: "All things are impermanent, work out your salvation with diligence."