PORTLAND, Ore. (USA) -- There should be some Thanksgiving leftovers at the Justice Center Jail. Stephen Marshall, 20, who is accused of eco-sabotage, has asked for vegan meals (no meat, eggs or dairy) since he arrived at the jail in August. 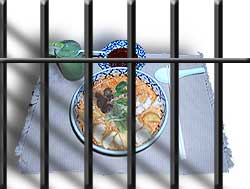 Jail officials have refused to adhere to his dietary wishes, and are offering him turkey and stuffing for Thanksgiving. Marshall probably won't eat too much.

"It's a huge problem," said Lt. Michael Shults, a spokesman for the Multnomah County Sheriff's Office, which operates the county jails. "There's always somebody coming in and saying, 'I can't eat that.' Once you give someone one thing and somebody else another, we're running a full scale buffet, which is very expensive."

The jail's kitchen provides custom meals only for religious or medical reasons. Marshall cites no religious conviction, only his beliefs against animal cruelty.

Marshall's attorney would not allow his client to discuss his dietary needs. But Chantel Guidry, a Lawrence, Kan.-based member of the prisoner support network Anarchist Black Cross, is leading a letter-writing campaign to get Marshall his vegan diet.

Guidry says Marshall survives on whatever vegan items arrive on his tray, and she is concerned about his health.

"It is not necessary that Mr. Marshall lose a great deal of weight and risk his good health just because he is not a member of an accepted religion," Guidry wrote in a letter dated Monday to the Justice Center jail captain.

Marshall is accused of plotting to blow up trucks and equipment belonging to Morse Bros., which he claimed is polluting a stream in Washington County. He has a Dec. 6 trial date in federal court.

As of last week, the county was providing special diets for about 10 percent of the total jail population. Shults said a panel of chaplains, including Muslim and Buddhist clerics, helps screen religious dietary requests based on documented practice.

"Portland is a very diverse community," Shults said. "We decided to go out and ask for help."