Washington, USA -- During his recent Washington visit, His Holiness the Dalai Lama served as the special guest at a roundtable lunch held at the Aspen Institute's headquarters office. His opening remarks focused on his notion of universal responsibility. 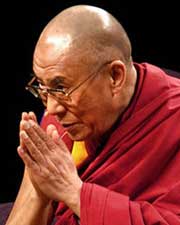 "Basically, universal responsibility is feeling for other people's suffering just as we feel our own. It is the realization that even our enemy is entirely motivated by the quest for happiness," he has said. "We must recognize that all beings want the same thing that we want. This is the way to achieve a true understanding, unfettered by artificial consideration."

In this roundtable lunch, the Dalai Lama expounded on that idea of universal responsibility and explained his three lifelong commitments: the promotion of human value, the promotion of religious harmony, and the independence of Tibet. "[The promotion of human value] includes peace, the environment, the world's population, the energy crisis, water crisis, water resources, and also the gap between the rich and poor not only on a global level but also on a US level," said the Dalai Lama. "The key factor here is to create a more compassionate society, successful society, responsible society." Religious harmony, he continued, comes from valuing all religious traditions. "From my little experience, I know, I can feel the value of all traditions." Thirdly, he spoke about Tibetan independence from China, which he defined by "self-governance in the areas that Tibetans know best."

The Dalai Lama also discussed the correlation between spirituality and brain function. "If you follow any [religious] practice, your mind becomes more compassionate and calm, more peaceful, and your mental function becomes more effective."

The event included a question-and-answer session with roundtable participants. Richard Blum, chairman of Blum Capital Partners, posed the question: "In Tibet, you had a theocracy for a thousand years, but now recently, in your government-in-exile, you have decided to create a separation between church and state. Why?" The Dalai Lama's response was direct. "The old system [of theocratic government] is out of date," he said.

"When a ruling institution becomes religious, that is harmful. Religion has a responsibility for moral principles. When one institution takes on both responsibilities, that's dangerous, and not only out of date but, on a practical level, bad." Akbar Ahmed, chair of Islamic Studies at American University, asked the Dalai Lama where people of faith are still going wrong. "We think the secondary is more important than the primary. We focus on the minor things and forget about the essential teachings," answered the Dalai Lama. "Yes, I am a Buddhist. I have a strong faith toward Buddhism, but I should not have an attachment toward Buddhism. If I attach myself to it, then that's against the essential teachings of Buddhism."