WATSONVILLE, CA (USA) -- To the Japanese immigrants who arrived in the Pajaro Valley in the 1890s, the Buddhist temple they established in 1906 served as a religious and social focal point to a community far from its homeland. 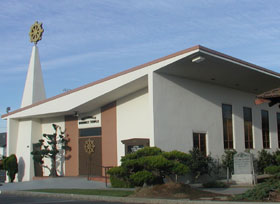 << The Buddhist Temple in Watsonville, CA celebrates its centenary

To their children and grandchildren, returning to a not-entirely welcoming community after internment during World War II, the Bridge Street temple became "kind of a home base," said Norman Uyeda, president of the Watsonville Buddhist Temple.

But more recently, Uyeda said, as an older generation passes into memory and younger Japanese-Americans move into a wider and more accepting world, the congregation, known as the sangha, has seen its membership shrink.

So as the temple celebrates its centennial year, members will host a series of lectures and celebrations throughout the year aimed at reconnecting younger Japanese-Americans to their heritage and sharing their traditions with the wider community.

Tuesday, historian Sandy Lydon will launch the lecture series with a talk about the past, present and future impact of the Japanese-American community on Santa Cruz County.

"In the way certain events call us back to our families, this is a way of calling ourselves back to our religious family," Uyeda said. "The centennial events will call our family back to what we and our grandparents experienced together."

By 1900, close to 1,300 Japanese were living in an area running from Santa Cruz to Hollister. Many were Christians, and they established Westview Presbyterian Church here in 1898.

But Japanese Buddhists had no place to express their faith until 1905 when local leaders invited a Buddhist minister from San Francisco to visit the town once a month to conduct religious and funeral services, according to temple member Mas Hashimoto.

The need for a more permanent arrangement prompted the official organization of the Watsonville Buddhist Temple, and an inaugural ceremony was held in July 1906 at the Opera House, across from the City Plaza on East Third Street, now East Beach Street. The first temple, built in 1908 at Union and Bridge streets, served the community for 50 years until the present temple was built nearby on Bridge Street in 1956.

To prepare for the centennial, members are sprucing up the temple and planning to make major holidays throughout the year, such as February's Nirvana Day — the day Buddha died and passed into Nirvana — and other special occasions, said Bill Wartenberg, one of a handful of members not of Japanese ancestry and the chief organizer of centennial events.

In addition to Lydon's lecture, the temple will also host talks by religious leaders.

All lead up to the Nov. 4 centennial celebration and banquet.

Wartenberg, who grew up as a Methodist but converted to Buddhism after marrying a Japanese-American, said the centennial celebration offers a chance for outsiders to learn more about the faith and the people who practice it.

"Everything we do is open to the public," Wartenberg said. "People may be interested in what the church does, and we encourage anyone interested to attend."

WHAT: Watsonville Buddhist Temple hosts first in yearlong lecture series.
WHO: Historian Sandy Lydon will speak on the past, present and future impact of Japanese-Americans on Santa Cruz County.
WHEN: 7:30-10 p.m. Tuesday.
WHERE: 423 Bridge St., Watsonville.
COST: Free.
Information: 724-7860.