Fremont, CA (USA) -- IN the television show, the bald monk always seems to address his young scholar the same way. 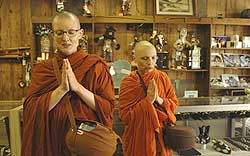 << Ayya Tathaaloka Bhikkhuni and Ayya Sucinta Bhikkhuni chant a blessing at The Turquoise Shop, a shop in the Niles District in Fremont, where the Dhammadharini Vihara, the first women's monastic retreat in the United States, is located. (Bea Ahbeck/The Argus)

He wordlessly enters the room. He adjusts his robe. He lowers himself soundlessly to a flat cushion not much plumper than a cool wooden floor. He shuts his eyelids. He purses his lips. He breathes audibly, a humming noise that calms. Then, he speaks — a bold, barefaced and cloudlike truth. Below it, the becauses fall like raindrops.

"There is a principle about peace, that the things most valuable and precious in human life cannot have a price tag," he might say, opening with a topic sentence first, like any well-tutored English student, then following with a supporting paragraph. "Preciousness, and peace, comes not from material objects."

But this is real life. The he is, notably, a she. And it's a scene in the home of Ayya Tathaaloka Bhikkhuni, an ordained Buddhist monk who recently converted a Fremont cul-de-sac rental into California's first monastic residence and retreat for women.

The bald head, shaved twice monthly, is her own. The rust-colored robe, her own. Those words about peace, too, are her own. Yet it all seems as if it's straight from a small screen script. And for good reason.

"The first time I remember aspiring to monastic life was watching the show, 'Kung Fu,' and watching Caine and his teacher when he was a young monk," says Ayya. "Then there was 'The Lord of the Rings.' 'Star Wars.' I read those books when I was a kid. The disciple and wise master archetype is very present in all those stories, the quest for enlightenment, the overcoming of greed... I just strongly connected with that."

It makes sense that 37-year-old Ayya — born Heather Buske — was inspired by a fictional male role model. Despite the strides the secular world has taken in leveling the playing fields for men and women, the Buddhist world still has gender issues. Though there are bhikkhunis — Buddhist female monastics — most women in orders in the United States have had to travel to Southeast Asia to study in anticipation of their ordination.

Ayya studied in South Korea, after traveling through India and North Asia. Although ordination for Buddhist women dates back more than 2,500 years, any sort of women's movement effectively died out 1,000 years ago. Ayya helped turn that tide in 1997 when she was ordained in Los Angeles in a multi-national Buddhist ordination that marked the beginning in a resurgence of female monastics.

Still, such a thing is the exception.

"It's something you think doesn't happen in Buddhism," she says. "It's almost as if women are impure, whereas the men can be ordained. It seems like those ideas get in there somehow. The teaching gets twisted around."

That's why Ayya founded what she calls Dhammadharini Vihara, one of only three known female monastic retreats in the nation, in a faceless two-story home in the residential area between the Niles Historic District and Old Canyon. Though dogs bark, bass beats thump and trains relentlessly roll past the neighborhood backyards, the vihara is meant to make it easier for other women to find peace, tranquility and, eventually, ordination.

"I think of it like soil. It may be parched, but through the cracks, the hearty seeds will come through," she says. "It's not that there aren't great ladies — there are. It's just that they're largely unseen and unknown."

Ayya is seeing the fruits of her labor. Dhammadharini