BERKELEY, CA (USA) -- The University of California, Berkeley will establish a distinguished professorship in Tibetan Buddhism, thanks to a $1 million endowment from Khyentse Foundation. 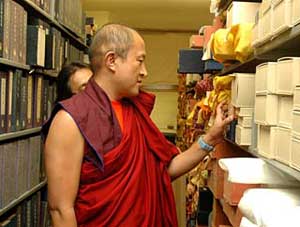 The addition of a faculty member specializing in Tibetan Buddhism is not only important for the newly reconstituted Buddhist Studies program at UC Berkeley, but it will also strengthen Asian Studies on campus more generally, and enrich such related disciplines on campus as religious studies, art history and linguistics.

"Universities are known for rigorous objective study," said Khyentse Rinpoche.  "If Buddhism undergoes such a thorough examination, it can benefit not only the students, but Buddhism itself. From what I see, Berkeley has the strongest history of Buddhist study in Western Academia.  It is incredible."

Khyentse Foundation is a non-profit organization founded by Dzongsar Khyentse Rinpoche in 2001 to establish a system of patronage that supports institutions and individuals engaged in the study and practice of the Buddha's vision of wisdom and compassion.

Dzongsar Jamyang Khyentse Rinpoche was born in Bhutan in 1961, and was recognized as the main incarnation of the Khyentse lineage of Tibetan Buddhism. He has studied with some of the greatest contemporary masters, particularly H.H. Dilgo Khyentse Rinpoche.

From a young age he has been active in the preservation of Buddhist teaching, establishing centers of learning, supporting practitioners, publishing books and teaching all over the world. Dzongsar Khyentse Rinpoche supervises his traditional seat of Dzongsar Monastery and its retreat centers in Eastern Tibet, as well as his new colleges in India and Bhutan. He has also has established centers in Australia, North America and the Far East. These are gathered under his other nonprofit organization, Siddhartha's Intent.

Rinpoche served as an advisor to filmmaker Bernardo Bertolucci on "Little Buddha" and directed the films "The Cup" and "Travelers & Magicians." He also is the author of a new book, "What Makes You Not a Buddhist." He visited the campus Aug. 9 to meet with faculty and students.

"I feel with this one contribution we've started the equivalent of 100 monasteries," he said.