Monk, neighbors not at peace 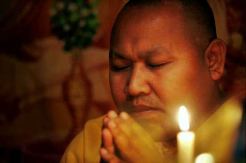 << ason Fritz / The Herald
The Venerable Try Snguon, a Cambodian Buddhist monk, performs a Kathina ceremony on Nov. 4 at the Watt Khemararam temple near Lynnwood.

"It was terrible, chaotic," said Sharon Beer, who can see the terra-cotta lions guarding the temple's driveway from her back yard.

Instead, some neighbors filed noise complaints with the Snohomish County Sheriff's Department. Snguon is known among Cambodian refugees across the Pacific Northwest for his wisdom and fortune-telling abilities.

He never predicted that he would clash with his neighbors.

Snguon moved more than 7,000 miles from Cambodia to serve Cambodian refugees in Snohomish County. With $250,000 in donations from the county's Cambodian Buddhists, he bought 31/2 acres of unincorporated Snohomish County land near Lynnwood.

His plan was to build a temple, but he didn't get far.

The lot holds a small, yellow ranch-style house in which Snguon lives with another monk.

The head of a Buddha statue nearly touches the ceiling in a giant detached garage. There is a gravel volleyball court near the driveway, so young Cambodian men can get exercise, Snguon said.

Snguon envisioned a tranquil retreat, where Buddhists could walk among the evergreen trees, but says county codes have stalled his dream.

"The county says a temple would be too big here," Snguon, 33, said. "They want parking and everything."

The property is zoned for single-family homes, said Scott Whitcutt, a senior planner for Snohomish County. In 2004, Snguon applied to build a temple, but he didn't pursue the necessary permits, Whitcutt said.

What Cambodian immigrants say they crave most doesn't require a large temple.

Instead, they prefer to enter a small alcove off to the side of Snguon's house and sit on the floor in front of a coffee table.

Snguon offers soda or bottled coffee drinks, then picks up a deck of regular playing cards. As he lays them out, he uncovers the secrets of their futures.

"The stuff he does is very much rooted in traditional Cambodian culture," said Timothy O'Brien, an American Buddhist monk and executive director of the Northwest Dharma Association.

Buddhism doesn't teach fortune-telling, but it's not prohibited so long as it doesn't cause harm to anyone, O'Brien said.

Fortune-telling is common in traditional Asian Buddhist cultures because the practice was widespread at the time of the Buddha.

Michael Chhim, 52, invited Snguon to his brand-new home in a Bothell subdivision to preside over a blessing ceremony and housewarming feast.

"This family wants to be safe and healthy and become rich," said Chhim, 52, a Cambodian immigrant.

Snguon and his apprentice, Thearith Seng, 28, earned a donation for their services.

There were baskets of fruit wrapped in orange cellophane and bottles of soda. Roast duck, chicken, even a pig were placed throughout the room, ready for a feast to begin.

In a ceremony that stretched more than two hours, Snguon chased evil spirits from the property with rhythmic chanting. Chhim and his wife, Saveth Siv, sat on the floor with dozens of other worshippers and bowed - hands clasped, eyes closed.

These traditions soothe Cambodian refugees who remain haunted by the Cambodian civil war from 1970 to 1975, when more than a fifth of the country's people died.

"This monk, he's famous!" said Sarath Tim, who lost her husband and seven other family members in the civil war. "He's a really good fortune teller."

Tim admits that Snguon's predictions aren't always correct, but even when he gets it wrong, she said, the tradition is comforting. It reminds her of the homeland of her childhood.

Ninety percent of all Buddhist monks in Cambodia were killed in the country's civil war, said Tom Flint, an American Buddhist monk who was trained in Cambodia and now lives in a monastery in Woodinville. Only the monks who escaped the country survived, he said.

"There are about 40,000 monks now, but most are young," said Flint, who goes by the name Santi. "There are only about 700 old monks to pass on the tradition to them, so standards of education have changed."

Snguon is from a destitute village in northern Cambodia. His parents left him in the care of Buddhist monks when he was 2 years old with hope that he would have a better life.

When Snguon was 8 years old, he fell deathly ill.

He emerged three days later with renewed health and a conviction to enter religious life. At 13, his head was shaved and he joined the monastery for good. He said he began preaching, telling fortunes and offering advice right away.

"When I have a problem, I ask him, 'What should I do?' And he gives me a blessing," said Meoun Dith, an elderly woman who lost most of her family during the war.

Each blessing or fortune earns Snguon a donation. He says he spent more than $100,000 to erect the garage - the makeshift temple - and place shrines on his gravelly lawn.

Now, the man who finds it easier to bow politely than struggle through a conversation in English, is looking for land in northern Snohomish County, where he hopes to escape strict zoning requirements.

It will be difficult for many Cambodians to travel to the new temple - most live in southern Snohomish County - but Snguon doesn't feel he has a choice.