Anchorage, Alaska (US) -- Finals week looms like a black cloud. And when that storm passes, a manic flurry of holiday shopping and get-togethers soon follows. The White Lotus Temple offers an Eastern-style reprieve. 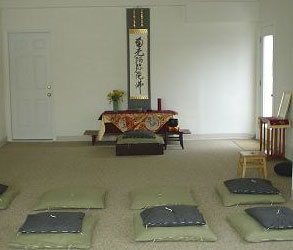 << The Shrine hall of the White Lotus temple in Anchorage, Alaska

Through the rest of December, the temple offers a series of lectures about Buddhism on Monday evenings.

The White Lotus Temple holds services every Sunday at 11 a.m. but has also been hosting the introductory lectures on Buddhism, given by Buddhist priest Rev. Yuho B. Van Parys, since mid-November.

In his next few lectures at the White Lotus Temple, Van Parys will cover the Four Noble Truths.

“I love listening to his lectures,” UAA Spanish instructor Maria Anderson said. “He gives an awesome ‘Intro to Buddhism’ lecture.”

The different types of Buddhism differ mainly in what they teach about the fourth noble truth — that is, the path that leads to the cessation of suffering.

In his introduction to Buddhism lecture, Van Parys talks about the history of the Buddha.

Buddhism arose in India in the fifth century. In India at that time, the predominant spiritual concept about the world was that it continued through acts of sacrifice. Members of society each made up a part of the body of society. For example, the priests made the head, the warriors the arms, the merchants the body, and the laborers the legs. Each person received their spiritual and economic due through the priests, who were the only people with the power to carry out the correct sacrifice.

Van Parys said that in time, groups emerged that questioned the power of the sacrifice. These groups became known as “The Wanderers.” Through these questions, Buddhism evolved. The basis of Buddhism is to remove suffering from one’s life.

“I have a friend that has taken me to the Thai temple, and Buddhism is very, very interesting to me,” said Brett Frazer, 19, who attended Van Parys’ Nov. 27 lecture. “I am going to come back for the rest of the series, and I also may come to service on Sunday.”

Van Parys was born in Belgium, and he found that he did not completely agree with his Catholic upbringings. At age 21 he visited India, where he came into contact with Buddhists for the first time. After Buddhism sparked his interest, he traveled east to southeastern Asian countries, where he was introduced to Tibetan Buddhism. Finally, he traveled to Japan and was invited to a Zen monastery. Van Parys practiced Zen for a while and eventually returned to Belgium.

“I always knew I was a spiritual person,” he said. “I’m a person looking for faith, but I don’t look for belief — that’s the difference.”

“Meeting him was a big change. He taught me everything. He made me go and get my masters in comparative religion.”

Van Parys finally became a priest in the Japanese Pure Land Tradition in 1994. He moved to Alaska in 1998 with his wife, also a priest, and the two of them founded White Lotus Temple.

The White Lotus Temple is located in the Turnagain Arts Building, at 4105 Turnagain Blvd. East, Suite G-2 (off Spenard Road between the Harley Davidson Shop and McDonald’s). The lectures on Buddhism are held there every Monday through the end of December from 7:30 to 8:00 p.m.