Zimmerman is among 300 such Buddhists in the U.S. 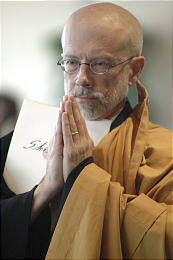 On the other hand, as Zimmerman says, Zen Buddhism is not something a person learns intellectually. To do koan study, for example, is to solve 750 Zen riddles not by applying logic or a formula but by an understanding that comes from watching one's own mind through years of meditation.

Zimmerman is now officially a Zen teacher, having last weekend received the "transmission" of Buddhist dharma that stretches back 2,500 years in a direct lineage to the Buddha himself. According to Genpo Roshi, Zen master and abbot of the Kanzeon Zen Center is Salt Lake, Zimmerman is the first former Supreme Court justice, and maybe even the first lawyer, to become a Zen teacher, and one of only 300 Zen teachers in the United States.

The ceremony was done in secret at midnight on Saturday, in the "room of the ancestors" at the Zen Center. The next day, in front of Zen students and Zimmerman's friends, highlights of the ritual were performed again at the Jewish Community Center.

This ceremony was preceded by 30 minutes of a meditation in a silence so profound that to fidget or swallow seemed like an affront. Roshi sat cross-legged on a bench at the front of the room. Zimmerman's wife, Diane Hamilton, also a Zen monk, sat cross-legged nearby. She received transmission to be a Zen teacher last spring.

"I will receive a lot of criticism for this," said Roshi about his decision to make some of the esoteric ritual public. "But I feel we are living in a time when it's necessary that we all awaken."

The ritual began with bowing. "Three bows," whispered Roshi after Zimmerman did only one. "An auspicious beginning," said the sheepish new teacher, who opened a white scarf and laid it on the floor in front of the Zen master.

The ceremony was full of bowing, sometimes three bows in a row, sometimes nine. Each time, Zimmerman put his palms together and raised them above the level of his ears, a symbolic act of raising his inherent Buddha nature above his ego. After more prostrations, Roshi pronounced that he was giving Zimmerman "the true dharma eye treasury of the ancestors. Do not let it be extinguished. Carry it on forever."

Zimmerman was then given a series of gifts, including a document of proof that he is among the 82nd generation of Buddha successors, a gold robe, a Buddha bowl and a stick representing the backbone of Buddha.

A few days later, Zimmerman talked about what is at the heart of the Buddha dharma.

We live in a dualistic world, he said, "in which there is you and me, and this and that, and subject and object. But we also live in a world in which everything is one. To the degree that you recognize that viscerally, where you feel it as a reality, your anxiety about your fate as an individual human is reduced. You recognize that things as they are, are not wrong, are not imperfect.

"You carry both of those ideas at once. Because it's an and. Things are the same and they're not. You're separate and you're not. Any time you articulate one view, there's another view, which makes the first incomplete. Existence is ineffable. And that's fine."

And then one more seemingly contradictory Buddhist thought. "It's not spooky. And it is spooky. You have to keep letting go of the spookiness."