Woman Offers Meditation To The Homeless

First Project Of Its Kind In Nation

San Francisco, USA -- If you are homeless in the Bay Area, there are a number of places you can turn to for shelter, clothing and food. But none is as unusual as a one-woman effort now underway in San Francisco. She's offering peace of mind. 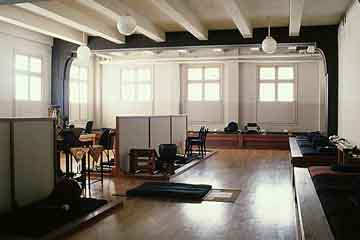 The practice of meditation has been around for thousands of years. But what's happening in this room is unique. This is believed to be the first meditation project in the nation designed for those who are homeless or living on the edge.

Rev. Jana Drakka, Buddhist monk: "Our aim is to be at peace with whatever comes up."

You might think meditation is something only yuppies do, but one purpose of meditation is to reduce stress, and as anyone living on the streets will tell you, it's certainly stressful being homeless.

Rev. Jana Drakka, Buddhist monk: "I have had people, especially when I first started doing this about three years ago, people would say are you crazy."

Rev. Jana Drakka is a Buddhist monk who grew up in Scotland. She first began working with the homeless by going into the city's single room hotels to conduct funeral services for those who died. Meditation is her way of helping the living.

Rev. Jana Drakka, Buddhist monk: "Everything in this life can and will be taken away from us, but while we're alive, there's one thing no one can take away. They can take away your home, your job, your health can go, but freedom of mind -- we are all free."

Steve Eastman believes meditation is helping him move forward despite being surrounded by poverty, violence, alcohol and drugs.

Steve Eastman, meditation client: "The more calm, the more centered, the more rational you are, the more likely it is that you can get some services or find some help."

That's what 54-year-old monk, Priscilla Fleischer, is trying to do. She facilitates five groups a week. Priscilla Fleischer is a clinical social worker from UCSF. She works with the homeless and sometimes sits in on the sessions.

Priscilla Fleischer, UCSF: "She has offered to people who one would not think could benefit from this kind of intervention, I think a lot of hope."

At a drop in center in the Tenderloin, Drakka adds movement and stretching along with deep breathing exercises. Research has been done on the medical benefits of meditation, but not specifically on this population and these sessions. There's plenty of anecdotal evidence.

Carlos Mendoza Hernandez, Tenderloin Housing Clinic: "Their attitudes have changed completely. They are able to focus on every day, normal life."

Drakka was once homeless herself. Now, as a monk she lives at the San Francisco Zen Center and considers the meditation sessions a way of giving back to the community.

Porter Davis, Meditation Client: "She's reaching out to try to engage people in something she has a passion for." Drakka receives no money for her work, but would like to expand the program. And is hoping to do that someday with community support.