Tsering Gyaltsen: An inside job

To a Buddhist lama, teaching peace means helping others reach a state of inner tranquility

Corvallis, OR (USA) -- Tsering Gyaltsen has come a long way to settle in Corvallis as the teacher of a small but devoted group of students interested in learning the ancient practices of Tibetan Buddhism. 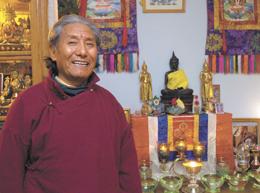 << Scobel Wiggins/Gazette-Times
A candlelit shrine in Tsering Gyaltsen’s Corvallis home transports visitors to a land far away. Born in western Tibet, Gyaltsen hosts a group of students every Saturday morning.

Born in western Tibet in 1945, Gyaltsen went into exile to India with his family at the age of 16. They lived in a settlement managed in part by the Dalai Lama, who fled Tibet in 1959 after the Chinese invasion.

He attended the Varanasi Tibetan Institute of High Studies within Sanskrit University and, in 1982, he received an Acharya degree — a type of master’s degree in Buddhist studies.

For six years, Gyaltsen worked for the Dalai Lama as a representative of the Nyingmapa school of Buddhism within the Tibetan government in exile, operating in Dharmasala, India.

Gyaltsen then spent three years “in retreat” in Orissa, India, an intense period of total isolation dedicated to meditation and learning Buddhist practices from an experienced teacher. When the retreat was over, he moved his family to Nepal, where he built a retreat center.

“My family was poor,” he explained, “and this way I could take care of them. Others can stay there, too, and I don’t charge them.”

Gyaltsen came to the United States in 1996 at the invitation of a friend, Lama Tharchin Rinpoche, who lived at the Pema Osel Ling Retreat Center near Santa Cruz, Calif. He and his wife arrived intending just to visit, but while they were there the couple’s only child was born.

Concerned about their son’s health and welfare if they were to move back to Nepal, they decided to stay. Ten years ago, they moved to Corvallis, and Gyaltsen has become a U.S. citizen.

Every Saturday morning, a small samgha of students gathers in his living room in northeast Corvallis, where a candlelit home shrine, a china cabinet full of golden statues of Buddhist deities and large fabric thngkas on the wall transport visitors to a land far away.

“Lama Gyaltsen has a great sense of humor, and he’s well-educated,” said Robin Heatherington of Corvallis, one of his students for many years. “He’s just such a wonderful, kind and simple person.”

Gyaltsen is often invited to teach at retreat centers throughout the country and was asked to help lead the Tibetan New Year celebration in Hawaii last month. His last trip to Nepal was in 2006, when he spent four months making improvements to his retreat center and visiting his 82-year-old mother.

Asked what he enjoys most about teaching Buddhism, he said, “I wish to teach peace. Peace is not from looking outside. If you have peace on the inside, then you have peace.”