The 14th Dalai Lama 'Simple model for your own life'

Maui, Hawaii (USA) -- He has described himself as “a simple monk” of the Tibetan Buddhist faith, yet the message of the 14th Dalai Lama resonates deeply in the Western world, which seems to share few of the same values. 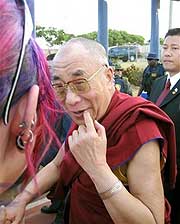 << The Dalai Lama speaks to people at War Memorial Stadium, Tuesday, April 24, 2007, in Maui, Hawaii. The 71-year-old Nobel Peace Prize winner and spiritual leader of Tibetan Buddhists, whose worldly name is Tenzin Gyatso, made his third visit to the islands and his first since 1994. (AP Photo/Agustin Tabares)

“I think his message of compassion, human understanding, basic human values is universal, and very relevant,” said Tashi Wangdi, the representative accompanying the spiritual and exiled political leader of Tibet who will present public teachings at 2 p.m. today and Wednesday at War Memorial Stadium.

“I think His Holiness’ quality is that he not only tells others about this, but he implements it, he shows it to others in his daily life. Over a period of time, people have accepted him as one of the important spiritual leaders.”

Final preparations for the Dalai Lama’s appearance were under way as Wangdi spoke. A graceful domed stage framed with flowers rose from the football field as Maui Arts & Cultural Center staff members put chairs in place, sound engineers tested levels and pastel test patterns on the JumboTron added to the twilight hues.

Asked where the Dalai Lama’s teachings of compassion, peace, patience and simple common sense fit into the fast-paced consumer-oriented Western lifestyle, Wangdi said, “If you look in general terms at the United States, well, of course there are problems. People are quite materialistic minded, wanting more things in life.

“But in the larger context, there is a great deal of freedom, openness, equality. These basic principles are very much part of the life in this country. That’s why people from other parts of the world all want to come to the United States. It’s not only because of the material benefits, but the freedom. I think it’s great.

“There’s always positive and negative, but I would think they are more positive.”

The long-anticipated visit by the Nobel Peace Prize-winning spiritual leader and best-selling author is his first to Maui on a tour that has taken him to Australia and Japan. He also will make six stops on the Mainland. Soothing music played as the crews went about their tasks, but there was an anticipation to the visit not unlike that for a rock star.

“After having heard him and after having followed his advice, if you feel as though his teachings mean something to you and you accept him as a simple model for your own life,” Wangdi said, “if then you develop a respect and devotion to him, I think that’s wise and well-founded. But to accept him just because he’s a popular personality, that I think is not a well-founded choice.

“As a Tibetan, we consider him a living Buddha. He means everything to us. But on another level, I also have developed a great admiration and devotion to him for what he is as a person. I have been serving His Holiness for 30-some years, and I have been very close to him. The greatest quality I always say is His Holiness is true to himself and true to everyone else, as he is. There’s no artificiality. He is what you see. Whether you see him in private moments or public, he’s the same person.”

The Dalai Lama’s homeland, Tibet, long has been under the control of the government of China, which has systematically worked to eliminate its cultural heritage while driving its people into exile. But the Dalai Lama’s representative held out hope for a peaceful resolution of that situation, too.

“We are trying to resolve it through negotiation with the Chinese government,” he said. “Since 2002, His Holiness’ representatives have been meeting with Chinese officials. They have met five times. We hope the sixth round will take place in the next few months. If the Chinese officials look at His Holiness’ proposals, which are made in great sincerity for the mutual benefit of China as a nation, the Chinese people and the Tibetans, then there is a solution, which is good for all. He’s not asking for independence; he’s seeking a solution within the Chinese constitution, and China’s not going to lose anything.

“We still feel there is common ground for negotiations and a way forward. But if there is no solution for Tibet, we will still be trying to keep our culture alive in exile, through the Himalayan belt. Ethnically, there is a Tibetan race. We speak the same language, share the same Buddhist culture. And there are many universities that have Tibetan studies programs.

“It will be a more difficult task, to preserve it in its entirety. But it will never be lost.”

Although political realities have beset his homeland and a climate of violence sometimes seems to pervade the world, the Dalai Lama has been a constant and steadfast proponent of peace.

“As a Tibetan Buddhist, of course, his basic philosophy is nonviolence. When there was this 9/11, he immediately wrote a long letter to President Bush in which he expressed his deep regrets and offered prayers for people who had lost their lives. But also he said the solution would not be in violent reprisals. Violence would bring more violence. That’s his basic approach. And if you listen to people in this country, they are speaking more about peace.”