Ontario, Oregon (USA) -- In the 1940s, the world trembled under the impact of World War II and thousands of Japanese- Americans suffered from prejudice and were sent to internment camps. 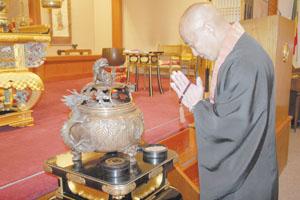 << The Rev. Dennis Fujimoto performs ‘Oshoko,’ the burning of incense, at the Idaho-Oregon Buddhist Temple Monday in Ontario. Temple members will sponsor celebrations for the temple’s 60th anniversary this weekend.

At the same time, agriculture dominated the Treasure Valley, and against the odds, one group of farmers and Japanese-Americans banded together to begin construction of the Idaho-Oregon Buddhist Temple.

This weekend the temple will celebrate its 60th anniversary. The celebration kicks off at 1 p.m. Saturday with a golf scramble.

“A lot of the building (of the Temple) that took place was at a time with the Second World War and a lot of prejudice was prevalent,” current Idaho-Oregon Buddhist Temple Rev. Dennis Fujimoto said. “During the war years, there was a pressure to be as American as possible. I think a lot of families changed to Christianity to say ‘I am American.’ It took a lot for the people to come together through that to build the temple. It made the group more cohesive.”

The Idaho-Oregon Buddhist Temple, situated at 286 S.E. Fourth Ave., Ontario, is part of the Jodo Shinshu Nishi Hongwanji tradition of Buddhism, which was founded in Japan more than 800 years ago by Shinran Shonin. The original area building was dedicated April 13, 1947, in an area southwest of Ontario, and expanding numbers led to the construction of a larger temple, this time in Ontario’s east side, completed February 1958.

The headquarters and mother temple are in Kyoto, Japan, and the Ontario temple is also affiliated with the Buddhist Churches of America as part of their Northwest District — one of only two temples in Oregon.

Many of the original Idaho-Oregon Buddhist Temple members managed farms and helped construct the temple, hauling dirt from the basement in wheelbarrows, after working a full day in the fields, Fujimoto said.

“This temple will stand 50 years after they have all died,” he said. “Their efforts were not just for them, they did a lot so the teachings would move onto the next generation, and the only time we have to recognize them is now. If you look at this altar, it’s so well done. Little Ontario has a temple you don’t see in larger cities. I grew up in California, so I had no idea there was a Japanese culture out here.”

The temple offered social interactions and support for the area Japanese community, he said, but with changing technology, that relationship is not as necessary, and most young people move out of the area to seek nonfarming careers.

“This particular school of Buddhism was geared toward peasants, farmers and fishermen,” Fujimoto said. “I think as farmers they recognized the rhythms of the universe, the seasonal changes. I think it (Buddhism) fits the lives of farmers especially because of that connection they have with their land. That connection makes them connected in the same way that Buddhism encourages.”

The location of the temple was chosen because there was a large Japanese community in the Treasure Valley, and Ontario serves as a central point, Fujimoto said. To this day, he said people travel to the temple from Nampa, Boise, Vale, La Grande, Weiser and Jamieson. On a low estimate, he said the temple now has about 200 members.

“I think the temple gets less prominent, but on these special occasions, everyone has the opportunity to recognize what their grandparents did for them,” Fujimoto said. “A lot of our older members see this as the last opportunity to get that recognition of the younger members. A lot of the members who build this are not going to be around at the 75th anniversary.”

Sunday, the temple will hold a family service at 11 a.m. with a special guest speaker — the Rev. Marvin Harada, minister of the Orange County Buddhist Temple in Anaheim, Calif., whose parents live in Ontario.

The temple will then host a catered buffet — $25 or adults and $10 for children — at Four Rivers Cultural Center following the service, including performances by Sangha Taiko, the Idaho-Oregon Buddhist Temple choir and Odori, Japanese dancing.

The temple will also be open for visitors during the celebration.