Miles to go in a walk for peace

Seattle, WA (USA) -- When it comes to promoting peace, the Rev. Senji Kanaeda walks his talk. Clad in an orange robe and wearing his adidas high-top walking shoes, Kanaeda was among three Buddhist monks who traversed the streets of Eugene Monday to kick off an "Interfaith Peace Walk Toward a Nuclear-Free Future" that will conclude Aug. 6 in Seattle. 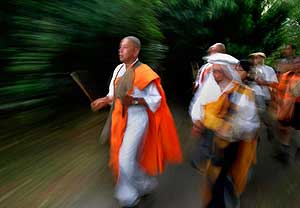 << The Rev. Senji Kanaeda leads an interfaith peace walk through downtown Eugene Monday. The walk will conclude in Seattle on Aug. 6.
Brian Davies, The Register-Guard

Monday's walk to several destinations around town was expected to be "very short - maybe seven or eight miles," Kanaeda said. In the next few weeks, the monks and their supporters will average 15 or more miles a day - logging more than 400 miles in all, and drumming, chanting and praying all the while.
advertisement

"I really hope there are no nuclear arms or weapons on this Earth," said Kanaeda, 48. "It's very simple - but very difficult to realize."

Kanaeda is a resident of the Nipponzan Myohoji Japanese Buddhist temple on Bainbridge Island west of Seattle - not far from the Trident nuclear submarine base in Bangor, Wash. The temple, established in 1918 by Nichidatsu Fujii, is dedicated to promoting peace through prayer, chanting and the visible testimony of walking.

The three-week walk began at the Japanese-American Art Memorial next to the Hult Center, which commemorates the hardships endured by Japanese-American civilians involuntarily sent to internment camps during World War II.

Kanaeda said he wanted to start the walk in Eugene in part to honor his friend Patricia Hoover, who lives here. Hoover, 60, is a "downwinder" - the moniker given to the thousands of residents who lived downwind of the Hanford Nuclear Reservation in Southeastern Washington.

Many downwinders have endured cancer and other major ailments as a result of the radioactive material released from Hanford, one of several former top-secret sites for the research and production of atomic bombs during and after World War II.

The monks' itinerary includes walking to Portland, then driving to Hanford for a walking vigil there before returning to the Interstate 5 corridor and walking toward Bangor.

Hoover, among about 30 people who gathered for an opening ceremony at the art memorial before the walk, said she first met Kanaeda at an anti-nuclear event in Eugene five years ago, and they have remained friends since.

Hoover said her ailments include a thyroid condition and a benign brain tumor; too weak to walk, she took part in the trek by leading the way on her bicycle.

Hoover said it's significant that the walk began Monday - July 16 - the anniversary of the U.S. government's detonation of the world's first atomic bomb in the New Mexico desert in 1945. Less than a month later, the United States dropped atomic bombs on the Japanese cities of Hiroshima and Nagasaki.

Local organizers christened the event as "From Hiroshima-Nagasaki to Hope." The walkers plan to reach the Ground Zero Center for Nonviolent Action on Bainbridge Island by Aug. 4, then return to Seattle for Hiroshima Memorial Day on Aug. 6.
advertisement

Monday's stops in Eugene included the new U.S. Courthouse and the Lane County War Veterans Memorial at Skinner Butte Park. The activities concluded with a potluck and film at St. Mary's Episcopal Church.

It was hard to miss the visitors, whose robes were saffron orange or yellow, not the muted browns often associated with monks. The bright colors also are worn by monks in India, where temple founder Fujii moved in the 1930s because he wished to know the origins of Buddhism and to meet with Gandhi.

The Bainbridge Island monks already have participated in a half-dozen peace walks this year, including one in Japan last month in support of Article 9 of the Japanese constitution, the so-called "no war" clause that forbids Japan from maintaining an army, navy or air force. Because the clause is not followed in practice, it should be removed, some in Japan say.

Whether in Japan or in Eugene, the walking often gets easier, not harder, as the miles pile up, Kanaeda said.

"The first time, it hurts," he said. "But finally, the feet and body are fit."