ZEN and the art of lawyering 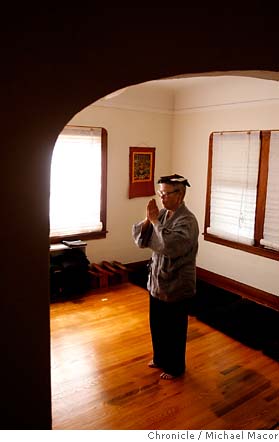 << Mary Mocine, above, was a labor lawyer before becoming a Zen priest. She now teaches meditation to burned-out lawyers. Chronicle photo by Michael Macor

Her work couldn't be more timely. Recent studies reinforce the results of a 1990 Johns Hopkins University report showing that lawyers suffer higher rates of depression than those in other professions.

Depression is often preceded by chronic stress, and with work hours escalating and public perception of lawyers in a nosedive, some members of the hyper-rational legal profession are looking East for relief. Meditation, yoga and other stress-reduction workshops are now offered by law firms across the country, and employees can earn continuing education credits for participating.

Fifteen million Americans say they practice some kind of meditation, according to the National Institutes of Health -- and most HMOs now cover alternative treatments such as acupuncture. Increasingly, "mindfulness" -- a synonym for living in the moment, without judgment -- is recommended for everything from improving your tennis game to coping with long commutes.

A Zen approach to the law emerged in 1999, when Professor Leonard Riskin of the University of Missouri at Columbia School of Law began discussing mindfulness meditation in his law classes.

"I believe that mindfulness can help mediators and other dispute resolution professionals (including lawyers) feel better, get more satisfaction out of their work, and do a better job for their clients," Riskin said in a 2005 interview with www.mediate.com, an online legal magazine.

His work has had a domino effect. After the Harvard Negotiation Law Review published his 2002 article -- "The Contemplative Lawyer: On the Potential Contributions of Mindfulness Meditation to Law Students, Lawyers and Their Clients" -- the review hosted a forum of more than 150 lawyers and law students at Harvard that spring to discuss the article. Soon afterward, several prestigious Boston law firms, include Hale & Dorr, put Riskin's ideas into practice, offering on-site classes in mindfulness meditation.

The path to mindfulness was a winding one for Mocine, who graduated from UC's Hastings College of the Law in 1968.

"It was such an inspiring time," she said. "I wanted to bring social activism to criminal defense work."

After doing legal aid work in Alaska and Alameda County, she represented the United Farm Workers, then co-founded a labor law firm in Berkeley. But six-day workweeks and a divorce took their toll. In the 1980s, she contracted the Epstein-Barr virus.

"I had to slow way down," she said. "I had to take a look at my life." A visit to Green Gulch Farm Zen Center in Muir Beach allowed her to do just that. "I fell in love with it," she said. "It spoke to me in some visceral way."

Because her parents had practiced Theosophy -- a nontheistic philosophy based on the "love of truth" -- Mocine had an affinity for some of its precepts, including karma and reincarnation.

"For me, Buddhism and Zen were easy to enter," she said. "It didn't seem unfamiliar."

Zen couldn't have been less familiar to Farley Tolpen, 51, a lawyer in private practice for 23 years in San Francisco and Marin.

"I was a scorched-earth litigator," said Tolpen, who has done mostly personal injury cases. "My way was the right way. There was no negotiation."

But by 1999, his life was unraveling. Overwhelmed by business problems and a painful divorce, he knew he needed to change. Then a benevolent friend invited him to a Monday night meditation group at Spirit Rock Meditation Center in Woodacre.

"It was magical," he said. "It slowed me down, made me stop and listen." Soon he was practicing mindfulness meditation twice a week.

Jan Lecklikner, a San Francisco public defender, had a similar experience with meditation.

"In my first five years of practice in the criminal justice system, I was the angry, hate-everybody kind of practitioner," said Lecklikner, 58. "It finally got through to me that I wasn't going to last long in that frame of mind."

A serious bout of pneumonia put her to the test. To strengthen her immune system, she began studying qi gong, a Chinese breathing and movement discipline that put her back in touch with Zen meditation, which she had attempted in the past. Her first lawyers meditation retreat was revelatory: "Both in meditation and in group discussions, so many things came up about dynamics in the office and dynamics in court."

According to a 2005 University of Wisconsin study of Tibetan monks, including eight of the Dalai Lama's most accomplished practitioners, "Mental training through meditation can change the inner workings of the brain." The monks showed an extraordinary capacity for focus, memory, learning and consciousness. Brain activity was especially high in the prefrontal cortex, which is associated with positive emotions.

Mocine believes the techniques of "active listening, communication and self-awareness" are applicable in the courtroom. "You can be fierce without being hateful," said Mocine, who no longer practices law. "Being a Zen teacher and a temple priest is what's important."

Some wonder if the legal profession is too conflict-oriented by nature to adapt to any part of Zen doctrine.

"The existing legal culture is based on an adversary system," said Peter Gabel, president of the New College of California School of Law, in San Francisco, and founder of the Project for Integrating Spirituality, Law and Politics.

"But legal culture is very important in putting forward, to a society, what is a just world," Gabel said. "We need a legal process that can foster a sense of empathy and compassion and mutual understanding."

Each month, Gabel leads a conference call in which lawyers from across the country discuss ways to improve the legal system. The format is simple: Twenty lawyers listen in during a 20-minute presentation, then participate in a Q & A for the next 40 minutes.

The most recent conference call featured a discussion of meditation launched by the law program director of the Center for Contemplative Mind in Society. "The debate was over whether deeper awareness, through the practice of meditation, can open the heart in a way that's essential for social change," Gabel said.

Lawyers who meditate say their colleagues sometimes don't get it.

"For fast-paced lawyers thinking in terms of billable hours, the idea of sitting down and meditating seems crazy," said Rochael Soper, 35, an intellectual property lawyer in private practice in San Carlos who is part of a monthly meditation group. "But in Zen, it's not about results."

Mocine is careful to make a distinction between short-term, stress-reduction workshops and a commitment to meditation practice.

"Workshops might reduce your stress, but they may not teach you anything," she said.

Tolpen, who still goes on frequent retreats, agrees that meditation is something one must treat as a practice, like the law.

"You can still be a warrior," he said, "but because you're at peace with yourself and you're centered, you're not coming from rage or fear or anger."

Tolpen said he still gets mad and makes mistakes, though now the experience and emotion feel different: "I'm a work in progress. It's exciting."

The Center for Contemplative Mind in Society:
www.contemplativemind.org

The Project for Integrating Spirituality, Law and Politics:
www.spiritlawpolitics.org