ADELANTO, CA (USA) -- The looming white statue that can be seen from Highway 395 past Chamberlaine Way is the first phase of a Buddhist meditation center. 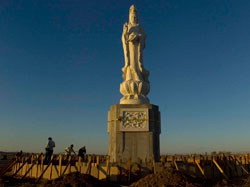 << Reneh Agha / Staff Photographer
A white statue sits off Highway 395 past Chamberlaine Way on Tuesday. The statue is the first phase of a Buddhist meditation center.

Builders have been working on the 15-acre property for about a month now and have erected a large white statue of Quan’Am, the goddess of compassion and mercy.

Quan’Am is one of the most universally beloved deities in the Buddhist tradition, often compared to the Christian’s St. Mary, and it is said that she hears the cries of all beings, according to www.lava.net.

There are plans for about nine buildings, including a main hall, a meditation hall and a classroom, said Gary Lucas of GM Concrete Inc.

“This is something pretty different for this area,” Lucas said.

A dedication for the statue will be Nov. 25, and after that the buildings are expected to go up as money comes in, Lucas said.

The builder said the plans are for the project to be completed in two years.