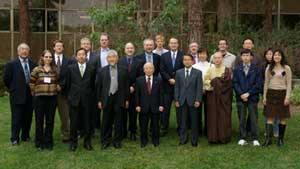 At a signing ceremony on Oct. 17, 2007, the UCLA Center for Buddhist Studies received the largest funding pledge in its history: $750,000 from the Bukkyo Dendo Kyokai America (BDK, Society for the Promotion of Buddhism), commonly known as the Numata Foundation. The BDK funding will establish a $500,000 Yehan Numata Endowment in Buddhist Studies at the center and provide another $250,000 in current-use funds over a 10-year period.

"Those of us working in Buddhist studies are grateful to the Numata Foundation both for its broad support of university programs over the years and for the important scholarly initiatives that it sponsors, such as an international project to translate the massive Chinese Buddhist canon into English," says UCLA Center for Buddhist Studies Director Professor Robert Buswell.

With this grant, Buswell adds, UCLA joins "a growing list of universities around the world that have established Numata Programs in Buddhist Studies, including Harvard, Chicago, Hawaii, Smith, and UC Berkeley in the United States, the universities of Toronto, McGill, and Calgary in Canada, and the universities of Leiden, Vienna, Oxford, and Hamburg in Europe." UCLA has a distinguished Buddhist studies program, boasting the largest faculty outside of Asia and the greatest number of graduate students studying Buddhism or Buddhist art history anywhere in the United States or Europe.

The Yehan Numata Endowment in Buddhist Studies at UCLA will help the center to accomplish several important aims. First, it will allow the Center to bring highly respected visiting faculty to UCLA each year to teach classes and intensive courses, and to present lectures and participate in colloquia and conferences, especially in areas of Buddhist studies that are not currently taught on campus. Second, the endowment will also allow the center to sponsor academic conferences and graduate workshops, publication projects, and other research activities. And third, the endowment will enhance graduate education in Buddhist Studies at UCLA, by encouraging graduate students to participate in the research projects of the Center and by ensuring that they will gain as wide a perspective as possible on the breadth and depth of the Buddhist tradition.

The endowment is named for the Rev. Dr. Yehan Numata (1897–1994), founder of BDK, who was an influential Japanese industrialist and one of the twentieth century’s great patrons of Buddhism. Mr. Numata came to the United States from Japan in the 1920s and graduated from Hollywood High School, so he and his family have long-standing connections with Southern California.

Rev. Numata founded the precision-instruments company Mitutoyo Corp. in 1934; the company’s charter directs that a substantial portion of its profits are to be used to fund Buddhist studies activities around the world. In 1965, Rev. Numata founded BDK to foster his corporation's giving. The Foundation strives to broaden knowledge around the globe about the Buddhist tradition and to encourage world peace and human happiness. It is now headed by Rev. Numata's son, Mr. Toshihide Numata.

Attending the Oct. 17 event were Toshihide Numata, chairman of BDK, Japan, and the Mitutoyo Corp.; Rev. Masahiro Takahashi, president of BDK America; Rev. Brian Nagata, chairman of the Numata Center for Buddhist Translation and Research; and President Mikio Yamashita and Executive Vice President Takashi Yazawa of Mitutoyo America Corp. The delegation was welcomed to UCLA by Professor Nicholas Entrikin, acting vice provost and dean for international studies; by Buswell, other faculty members, and graduate students in Buddhist studies; and by the staff of the Asia Institute.