Utah, USA -- Dozens of people arrive at the Kanzeon Zen Center just before 10 a.m. on Sunday, the largest crowd of the week, for meditation and a lesson on applying Buddhist teachings. 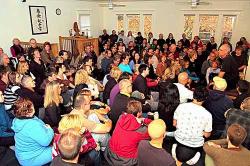 << Students learn about their spiritual self at the Zen Center.

People quietly hug and exchange smiles. They remove their shoes and head upstairs. Those who have already arrived are sitting on cushions, legs crossed and eyes closed in meditation.

By 10:15 a.m., dozens of people have filled the room, but the group is silent. The only sounds are of grumbling stomachs and passing cars.

Just after 10:30 a.m., when people come out of their meditation, many stretch as a teacher engages the group in an interactive conversation on applying the principles of Zen Buddhism, which helps people gain a better understanding of the world through self-reflection and meditation.

"The main thing that we are trying to do is get a better understanding of the nature of our world and ourselves," said Zen Center Director Bruce Lambson. "The goal is to be a better person by having a clear understanding of reality and deal with it in a healthy way."

The purpose of Zen is to "see, realize and manifest emptiness in our lives," said Rich Christofferson, a network administrator at the U who walks from his work to the Kanzeon Zen Center at 1268 E. South Temple twice every day to meditate.

The center's close proximity to the U and personal approach to spirituality are drawing more U students than ever before, visitors and staff at the center said.

"Although we have no official connection to the U, lots of students come here, particularly in the last three years," Lambson said. "The center is less formal, and we've applied Zen to (the students). A few young people showed up and became regulars. Then others showed up giving (the center) a younger vibe."

Just five years ago, "hardly any students came," Christofferson said, adding that he is pleased to see student participation increase.

Although the building's exterior is simple and does not draw much attention, the center, which is located just more than a block from campus, is gaining popularity among U students, tourists and locals through word of mouth.

"A lot of people come from out of town," said Ashley Cooper, a freshman in environmental studies. "I've seen famous skiers and boarders. But this is not a place just for the high class...everyone comes. It's close to the U, so it's convenient for students."

Some students embrace Zen because it focuses a lot on meditation, which is excellent relief for the stress with which students deal, Lambson said.

"We teach meditation as a practice to do a retrospective study of ourselves," he said. "The very nature (of meditation) is very calming."

Lambson said westerners are increasingly turning to meditation for relief from daily stresses.

"I like the way that it breaks down an older religion and makes it more practical," said Alia Thiel, a freshman in international relations who came to the U from Oakland, Calif., last year and heard about the Zen Center from a friend.

"(The Center) teaches me how to get through my day," she said. "Everyone teaches, and I like the community of people here from all walks of life."