LOS ANGELES, USA -- Anyone who lives more than a century and maintains sharpness of mind is likely to have a great deal of wisdom and experience to share. 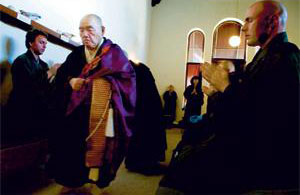 << Kyozan Joshu Sasaki Roshi walks through the Rinzai-Ji Zen Center in Los Angeles on Thursday. He spends about half the year at the Mt. Baldy Zen Center. (Thomas R. Cordova/Staff Photographer)

Imagine the wealth of insight the last surviving master of the Rinzai school of Zen Buddhism - credited with bringing the practice to the West - has to offer just two days after his 101st birthday.

Kyozan Joshu Sasaki Roshi came to the U.S. from Japan in 1962 to teach Americans. He spends about half the year at the Mt. Baldy Zen Center, the other half at his main temple, Rinzai-Ji in Los Angeles.

On Thursday, three days into an intensive retreat called Dai Sesshin, about 30 students in floor-length black robes walked in a line through the grounds of Rinzai-Ji, their steps purposeful and in sync.

Their hands were clasped, their eyes fixed ahead. All was silent but for the rush of morning traffic just a block away.

Inside a dimly lit hall, the students sat on rows of pillowed platforms, legs crossed, and began to chant.

The Roshi entered in a bright purple robe, clutching a fan, and was helped to a seat high up in the room.

He appeared remarkably robust for his years, and while short in stature, seemed giant up there, clearly evoking reverence from all the men and women present.
Advertisement

"The teaching of Buddha is different than the teaching of God. Buddhism is the teaching of karma," the Roshi said through a Japanese translator. "Karmic activity is not one but two opposing activities that are creating this world we live in, as well as ourselves in this world."

His students, most of whom have shaved or closely cropped hair, listened motionless and expressionless.

"At times, the two opposing activities appear in unified form, but this state of unification is not fixated and at once breaks into plus and minus," he said, occasionally pausing to chuckle.

"The foundation state when unified is perfect zero, and Buddha teaches this zero is the manifestation of true love. ... Plus is self-affirming activity and minus is self-negating activity. ... When separated, the distance between is the beginning of `I am self."'

The Roshi left his farm community in Japan to join the monastery at 13 when he couldn't accept that his brother just "went to heaven" after he died.

He studied under Joten Soko Miura Roshi and earned the title of Roshi himself at 40. He taught at Shoju-an, a temple founded by Zen Master Hakuin's master, until he was called to teach in the Western world 46 years ago.

He founded the Mt. Baldy Zen Center as a rigorous training facility for Zen students. It's occasionally open to the public.

After his talk, Joshu Roshi answered some questions.

Question: How did you celebrate your 101st birthday?

Answer: Every day I do the same thing. ... For me, every day is like a birthday. For example, today my helper did my laundry and put me in fresh clothes, and I feel very lively because with fresh clothes, my new self is born.

Q: How does God fit into Zen Buddhism?

A: In Zen Buddhism, God is not an object. God is your husband, or if you are a man, your wife is God. People in the U.S. and Europe also think their wives are their objects. Your wife is yourself. ...

When God created the world, divided into two pieces - pluses and minuses. Together, they manifest the zero. There is no other truth besides this. ...

If people think the teaching of God can't cover everything, they should pay attention to the teaching of Buddha and study it. Buddhism gives a clear overview of the world and of life. ...

Q: You have vowed to plant the seed of Zen Buddhism in this country before you die. Has the seed been planted sufficiently?

A: I planted, but the United States doesn't give enough fertilizer. ... So the seed is growing, but democracy of this country is not real true democracy, so it is difficult.

A: I'm becoming more and more stupid because the difference between myself and others and Buddha is fading away. When I was younger, the division was much clearer. Now, it is less and less.

Q: Have you selected your successor yet?

A: If America becomes my successor, it would be wonderful. Then I don't have to choose a successor.

Q: What is the meaning of life?

A: The meaning of life is zero. Also, life is love and the activity of love. For example, if one always manifests activity of love, world becomes peaceful. However, man and woman, they are different. ...

Q: Any last words of wisdom for the lost or searching souls in the world?

We will reach the state where you don't have to claim selfish `I am self,' and that state is true democracy.