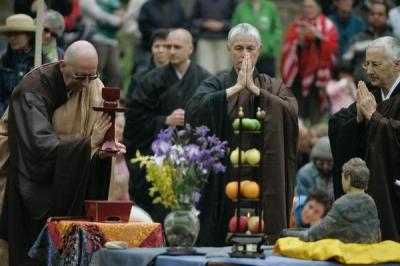 << Abbott Steve Stucky (left) leads an offering ceremony for Buddha at the beginning of the 20th and final annual Buddha's birthday pageant at the Green Gulch Zen Center in Muir Beach. (Special to the IJ/Douglas Zimmerman)

More than 400 people - at least half of them families with little kids - turned out for the 20-year-old theatrical pageant that boasted 50 adult and child performers; a full band of drums, gongs, violins and flutes; elaborate parasols and silken banners; a six-tusked white elephant animated by four people; and giant dragon puppets.

A 7-foot-tall baby Buddha gleamed gold in the morning sun that broke through fog just as the narrator Cory Fischer from "A Traveling Jewish Theatre" reached the part about the holy man's birth.

Dancing children and adults threw candies and peanuts into the crowd. They showered the guests with thousands of fresh-picked flower petals from the Green Gulch gardens. They chanted and sang, and guests joined in on everything from the solemn Buddhist Heart Sutra chant to a playful round of "Row, Row, Row Your Boat."

The masks, puppets and costumes created by Annie Hallatt of Inverness and Berkeley, who founded the theatrical spectacle in 1989 with the Zen monk and writer Norman Fischer, were worthy of a Geary Street theater production. Even one of the Zen Center's farm tractors got into Green Gulch's song and dance epic, which is choreographed to a narrative poem Fischer wrote about the birth of the Buddha.

But 2008 is the last year the pageant will be produced in this form, Hallatt said.

"The main reason is that the people who have been organizing it for the last few years are tired of doing it," said Hallatt, painting a last-minute mask for a character.

"There's a lot of work involved," explained Wendy Johnson, who was Green Gulch's head gardener for 25 years and participated in the pageant for most of its two decades. "Every year it gets created afresh. There's organizing the band, rehearsals, gathering the flowers for the baby Buddha's pagoda."

Norman Fischer, reached by telephone, said he and Hallatt were inspired to create it by the tradition of "wonderful community pageants all over Asia that celebrate the birth of the Buddha. Everyone in the village gets involved."

He deeply regrets its ending, he said. "I think it will be quite sad that it's the last one," he said.

Guests who showed up with picnic lunches for the show and the huge birthday cake that followed were shocked by the news that this one was the finale.

"We just love it as a communal celebration," said Barbara Banks, a Berkeley resident who has been attending the pageant with her toddlers for the past three years. "The Buddhist traditions give a lot of meaning to our family's life. We come here to be with friends and we make new friends every time. I can't believe this is the last one."

"Where do you get this kind of soul momentum in modern society?" asked Damian Raffa of San Francisco, a Green Gulch regular who attended with his family. "It's incredibly enriching for the community. For it to be ongoing would mean a whole new part of the community would have to step forward."

Hallatt said she was thinking of "calling one of the other Bay Area Zen centers to see if they want to adopt the show."

But Sukey Parmelee, who lives at Green Gulch Zen Center and who played Buddha's mother, the Queen, in the production, said this year simply marked the end of the elaborate production people have come to expect.

"We're just going to go back to a simple festivity," she said. "Maybe next year it will be a picnic, or a hoedown. But we will always have the little flower pagoda for the children and the chance to pour water on the baby Buddha. Sunday's a very public day here. We will always have a Buddha's birthday party."