Los Angeles, CA (USA) -- Vesak was celebrated at Dharma Vijaya Buddhist Vihara in Los Angeles this last Saturday and Sunday, and the focus was on children. 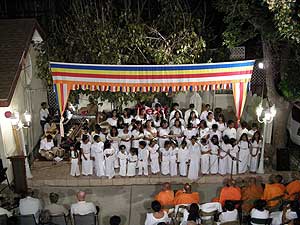 Ven. Walpola Piyananda, Abbot of Dharma Vijaya and President of the Buddhist Sangha Council of Southern California, said that the Buddha always emphasized the importance of educating and training children, and that he consistently showed his compassion to the innocent young.

The Vesak weekend was divided into two main events over the two days. Saturday was the “day of children,” and over one hundred of them participated in special activities. With the parents’ permission, twenty four bright young boys and girls sat last Sunday at the temple and wrote essays for competition. They chose topics ranging from “Buddhism and World Peace,” “The Five Precepts,” “Respect for Elders and Parents,” and “Buddhism in America.” Dr. Ananda Guruge, former Ambassador to the US and a distinguished scholar, was the judge of the essay competition, and he announced the winners on Saturday evening.

Fifteen young orators – aged 8 to 17 – competed in the speech contest at the event, and the audience gave their undivided attention to such topics as “Buddha: The Greatest Compassionate One,” “Buddhism in Daily Life,” “Vesak Day Should Be World Peace Day,” “Qualities of a Spiritual Friend,” and others. Imagine the look of surprise on the faces of the judges when a young man of nine years old, Madusha Silva, gave a talk on “The Four Sublime States in Buddhism” – an amazing accomplishment that secured him second prize. One young man, Dhishal Tennakoon, won first prize in the speech contest and tied for first place in the essay contest with Nilma Edward. Dharma Vijaya Buddhist Vihara awarded cash prizes to each of the winners in both competitions, and all contestants were given gifts and special certificates from the Buddhist Sangha Council of Southern California.

Eleven-year-old Kalpa Semasinghe co-wrote with his father, Sunil Semasinghe, a drama entitled “Mal Wage Punchi Lamai,” and also performed in the piece in the role of narrator. Mihiri Hettigoda played the lead, and twenty other children acted in supporting roles. The audience was enchanted, and applauded accordingly. Next came a series of songs performed by the Dharma Vijaya Dhamma School – several of them original compositions, the lyrics of which were written by Sunil Semasinghe. The choir was directed by Ramani Weerasingha.

Award certificates and beautifully-wrapped presents were given to every child in attendance for their participation. Afterwards, a special dansala was served to the three hundred parents and other guests by the Dharma Vijaya youth.

Sunday was set aside as a meditation retreat, and the participants, who numbered forty-five, took Eight Precepts for the day. Children were encouraged to participate in the meditation program as well, and a number of them practiced with the adults. A special Dharma Vijaya tradition is the admitting of new Buddhists to the congregation with a Pancil ceremony. This year five Americans committed themselves to a life of studying, practicing, and living the Buddha Dhamma. Each of them was given new Buddhist names: Ananda, Sumana, Gita, Panna, and Vijitha.

The event was organized by members of the Sangha, members of the Dharma Vijaya Board of Directors, and volunteers from the Daiaka Saba, and coordinated by Ven. Maitipe Wimalasara and Ven. Barbarawana Kalyanawansa. Honored guests included Ven. Halwitigala Assaji, Chief Sangha Nayaka of India, Mr. Nelson Perera, Coordinating Secretary of Religious Affairs in Sri Lanka, Mr. Ranaweera Bulegoda, and Dr. Ananda Guruge.

For the past 32 years Dharma Vijaya Buddhist Vihara has been the center of Sri Lankan Buddhist activities in Southern California. Most of the other temples in the region – as well as those in the rest of North America – have their roots at the Crenshaw Boulevard vihara. Ven. Piyananda has presided over Vesak celebrations in America ever since his arrival on July 4th, 1976 in the midst of the bicentennial festivities in California.

The day before Vesak 2008 Ven. Piyananda received his first box of advance copies of his new book, “The Bodhi Tree Grows in L.A: Tales of a Buddhist Monk in America,” which was published by Shambala, a division of Random House. Everyone welcomed the arrival of the new book on Vesak as an especially auspicious event for Buddhism in America.

“Children are the future not only for Buddhism, but for all of mankind,” said Ven. Piyananda. “We must train them early and thoroughly to prepare them for the unknown challenges they will face in this ever-changing, and increasingly more unstable, world. Dharma Vijaya is 100% committed to placing our young people at the top of our priority list.” Vesak this year certainly proved this policy.