Monk to bring a message of peace to Eastrose

Portland, OR (USA) -- Genko Rainwater, 59, recalls crying when the United States decided to invade Afghanistan, following the Sept. 11 attacks. Memories of the long Vietnam War stirred in her mind. 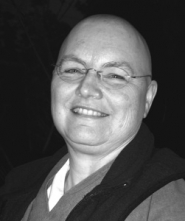 “We are still paying the costs for Vietnam,” she says.

With the United States at war in both Afghanistan and Iraq, Rainwater, a novice Zen Buddhist monk at the Dharma Rain Center in southeast Portland, believes the United States is also destined to make payments on both those wars for decades. However, she admits she feels a bit marginalized when it comes to talking about how the nation can find peace.

“What’s really clear to me is people aren’t consulting me about it,” she says with a chuckle that belies her deep concern.

Nonetheless, Rainwater, who was ordained more than a year ago, plans to talk about Buddhism, nonviolence and peace at Eastrose Fellowship Unitarian Universalist Church in Gresham on Sunday, June 29.

Rainwater stresses that she’s not interested in bringing some sort of polemical anti-George-Bush message to her listeners. Rather, she wants to talk about how Buddhism emphasizes paying attention to one’s thoughts and actions, and realizing that every choice – including the choice of retaliating against someone who has wronged you – can yield less than desirable results.

She adds that Buddhism doesn’t teach that evil is an entity apart from human choices or that people can be totally evil.

“We’re all in this together. As soon as you start seeing ‘that person’ as something else, something other, this creates the condition for war.”

Buddhism stresses that “actions can be unskillful or harmful” and can “increase suffering,” she says, noting that Buddhists themselves are conflicted over the issues of violence, a conflict highlighted by the recent strife in Tibet, where nationalists have rioted against Chinese authorities. Tibet’s exiled leader, the Dalai Lama, has counseled against violence throughout his nation’s struggle with China, a point that has frustrated some people, she says.

“He is not taking the easy way out and saying the Chinese are evil,” she says. “He’s saying the causes of the conflict are complex and various.”

She adds that if Tibetans were to engage in a wholesale war of resistance with China, such a path could lead them down a road they may wind up regretting having taken.

“If you get caught back in that cycle of violence, you’ve lost your culture.”

She says she’s not counseling passivity in the face of attack, but rather an attitude of thoughtfulness in how one responds. Sometimes force is needed to confront an attacker, she says, but it may be better to answer an attack with an act of kindness, not vengeance.

“We really are all the same. If I take care of you, I’m taking care of myself.”
Peace talk

The Dharma Rain Center is a Soto Zen Temple for lay practice, with its office at 2534 S.E. Madison St., Portland. The center offers numerous programs and events for the public. For more information, call 503-239-4846 or visit www.Dharma-Rain.Org.