Salt Lake City', Utah (USA) -- The red-robed members of Salt Lake City's only Tibetan Buddhist temple walked two by two Thursday evening around its west-side Salt Lake City block, one carrying a large Buddha statue, another protecting it with an umbrella and the rest waving incense, while ringing bells. 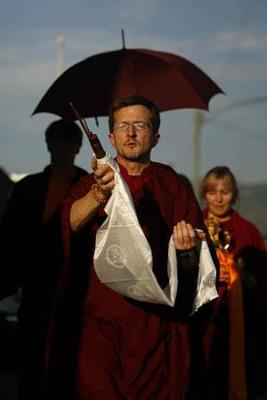 It was a ritual signifying the sacredness of their sanctuary, and it was the opening ceremony of the 2nd Annual Prayers for Compassion event that the temple sponsors.

After the procession, the 40 or so members of the temple and guests prostrated themselves before the temple's shrine and laid a white scarf, a gesture of generosity, across the altar.

The incantations launched three days of continuous praying for peace and compassion at the temple, known as Urgyen Samten Ling. They also are part of the annual celebration of the birthday of His Holiness the Dalai Lama, the spiritual leader of Tibetans worldwide. The prayers end at 2 p.m. Sunday with a blessing of food and communion.

Longtime Buddhist practitioner Jerry Gardner, who earned the title Lama Thupten Dorje Gyaltsen through years of study, led the prayers. He and his wife, Jean LaSarre Gardner, have been practicing Buddhism for 30 years. He also teaches martial arts and theater at the University of Utah.

"It is meant to increase loving kindness in the world for all living beings in all realms," Gardner said.

His wife, Jean Gardner, added: "It is a time to pull the community together, to find peace in themselves and let it spread to their families and across the world."

Temple officials keep track of the number of prayers said by counting on their rosaries: 108 beads equaled 100 mantras.

The Gardners established the temple in 1994, meeting in various downtown Salt Lake City locations. In 2004, the group, made up mostly of Westerners who practice Tibetan Buddhism, bought the old 1910 LDS 5th Ward building at 740 S. 300 West. Previously, it had been a Gothic nightclub and was painted almost entirely black. The Buddhists transformed it with touches of Tibet, red, green, white, orange and blue prayers flags and wall hangings, a giant wooden shrine bedecked with rows of gold-encased Buddha statues and ablaze with candles. Salt Lake's Tibetan community donated to it the thronelike seat that was built for the Dalai Lama in 2001, when he spoke at the University of Utah.

The Tibetans and Westerners who practice the same brand of Buddhism get along well, said Amber Robb, a member of the temple.

"Within the past two years our connection has grown stronger, especially with the turbulence last winter," Robb said, referring to the global protests of China's treatment of Tibetans during the months before the 2008 Summer Olympic Games in Beijing. "We supported them in their time of loss and difficulty with silent meditation. We do not want to get too bogged down in politics."

Robb was among the robed participants indicating that she has taken vows, including a commitment to Buddhism and a promise to practice 10 virtuous acts. She and most other temple members have also a vowed to abstain from alcohol, drugs, cigarettes and inappropriate sexual conduct.

Only one among them, Kris Baker, who goes by Dorje, has taken full monastic vows, which requires celibacy. But Robb hopes to reach that goal someday, becoming the sangha's first nun.

Participants do not even have to be Buddhist, though, Gardner said.

"All we ask is that they follow the way of kindness, compassion, joy, equanimity, wisdom and knowledge," he said. "It could just center them in their own belief system."