LONG BEACH, CA (USA) -- The 70 or so protesters from the Cambodian community who gathered in front of the Long Beach courthouse Monday and the 50 who crammed into Judge Joseph DiLoreto's courtroom will have to wait for the latest chapter to be played out in a dispute for control of the local Buddhist temple they attend. 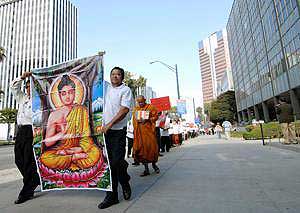 << Phat Nuon, 53, left, and Chhan Yin, 61, both of Long Beach, join other Cambodians and Buddhists outside the Long Beach Courthouse to challenge the signing over of Wat Vipassanaram to another religious group after a court order sought access to financial information. (Carlos Delgado/For the Press-Telegram)

John Ramirez, the head of the Church of the Revelation, appeared in DiLoreto's courtroom only briefly Monday on a contempt of court complaint. Because he had not been served with the complaint, Ramirez and his church were granted a continuation until Aug. 22.

Ramirez and his church are the latest wild card dealt into a case that has been laboring through DiLoreto's court for more than six months now.

The Khmer Buddhist Association, which has run Wat Vipassanaram, has been locked in a dispute with a dissident group that claims it should control the church after a disputed election ousted the KBA board.

Another faith enters the scene

The Church of the Revelation, a Gnostic church, became part of the equation after the board of directors of the Khmer Buddhist Association, which operates Wat Vipassanaram at 1239 E. Orange Ave., divested itself of the temple and its $4 million in properties and assets, placing them into a newly formed Buddhist charter under the umbrella of the Gnostic church.

The relationship between the new temple group and the church was unveiled when David Pasternak, a court-appointed receiver charged with overseeing temple finances, was denied access to records as ordered by DiLoreto.

Pasternak has since been sued in federal court by the Church of the Revelation, which claims he and the courts are interfering with freedom of religion.

Before Monday's court session, a large contingent of local Cambodians, with support from other temples, marched in front of the courthouse.

Carrying signs with slogans such as "We survived the Killing Fields and we'll survive religious invasion, too," and "Give me liberty (of my faith) or give me death," or simply "Save our church," the marchers said they were protesting the feared loss of their temple to another faith.

The venerable Pang Kheun, a monk at Wat Vipassanaram, said through translation that he worried the new organization would turn the temple into a church.

He added if that happened he would refuse to leave and die rather than submit.

The protesters were briefly met by a half-dozen police cars but allowed to continue their quiet protest.

Other than stopping twice to engage in religious chanting, the protesters marched silently in front of the courthouse.

About 30 minutes before the scheduled 10:30 a.m. trial time, the protesters filed into the courthouse and lined the halls outside DiLoreto's courtroom. Those who could not gain admittance after the room filled sat and waited outside the courtroom.

Before proceedings began, DiLoreto was surprised to find four sheriff's deputies, who monitored the crowd in his courtroom.

Monday's proceedings resulted when Pasternak wrote to the judge telling him of the denial of access to the finances and of the new relationship between the temple and church.

DiLoreto responded with an order to Ramirez to appear in court and show why he should not be judged in contempt.

Ramirez, who represented himself and the church without legal counsel, said he and his church have not received any property or assets from the temple and that it is a completely independent entity from his church.

"That may be your position, but it's not mine," DiLoreto said.

The judge said it was for him to decide whether the Khmer Buddhist Association, and by extension Ramirez and his church, were trying to circumvent the court order by putting its assets in a "shell corporation."

DiLoreto said his job was not concerned with religious dogma or practice, but to "set a mechanism by which we can reasonably and peaceably decide who are the proper custodian and members of the church."

Although the pairing of a Theravada Buddhist temple with a Gnostic church might seem incongruous to some, Ramirez said the religions were like "kissing cousins" in that they both seek personal knowledge and enlightenment and a path to a kind of nirvana.

"We both end up in the same place, we just take different paths," Ramirez said.

In two weeks, the paths lead back to Ramirez courtroom.