Reno, Nevada (USA) -- It’s easy to get lost in thought on the drive down Red Rock Road. The hills and desert create a contemplative state with their similarity in color and texture. 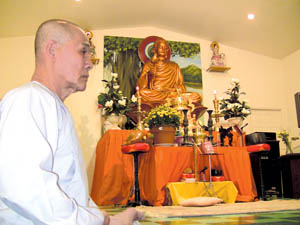 << Thi´ch Thieen Phoo poses in lotus position with the altar of the Quang Nghiem Zen Buddhist Temple in the background.
PHOTO BY D. BRIAN BURGHART

Suddenly, off to the right about five miles in from U.S. Highway 395, a yellow archway appears. It has not developed the dusty desert feeling of timelessness and looks wholly foreign. It is the entrance to the Quang Nghiem Zen Buddhist Temple and the portal to another world that exists on its own time, calendar and names.

Thich Thien Pho and a large dog greet me at the gate. Both are friendly. The monk folds his hands at his chest and bows before shaking my hand. I’m struck immediately by the strength and roughness of his hands. (The monk’s secular name is Hien Nguyen. He’s 74.) As a guy who shakes a lot of ministers’ hands, I can tell you they were something out of the ordinary.

The temple is connected to a home. Nearby are two Asian-styled pagodas. One, I would find out later, holds a bell, and the other, a drum. I kick my shoes off, and he motions me to a place on the green and white carpet.

The interior of the temple is dominated by a large, gold colored statue of the Buddha. It weighs two tons and was shipped from Nguyen’s native Vietnam. It sits on a steel platform on reinforced concrete. The room is fairly utilitarian with the altar being the focal point, but to the right of the altar are a television and the accoutrement for playing videos and DVDs. There are also pillows, books and woven tapestries around the room. In a back corner rests the large drum that resides in the pagoda during the year’s Buddhist celebrations that are held at the temple.

Nguyen speaks with a pronounced Vietnamese accent, but he’s patient and soft-spoken and doesn’t mind repeating things until I understand. He proceeds to tell me about the history of the temple and his family’s time in the United States—the histories are intertwined in many ways. He arrived in the United States in 1978. For the next 25 years, he worked two jobs—ironworker and 21 dealer. We stand, and he directs me to a board that holds the snapshots of the construction of the temple. It started with a home in Sparks, which was sold to buy the land on Red Rock. The major part of the temple was completed in 2000, although it’s evident that construction continues on the property.

I don’t want to get caught up in Nguyen’s personal history—I’ve seen reports about the huge impact his wife, a Buddhist nun, had on the temple’s progress. It’s just that Nguyen’s dedication seems an apt metaphor for the ascetic method he describes as the singular path to enlightenment.

There are essentially two parts of the method. The first is to emulate Buddha with behavior: Find a good teacher, do good deeds, be modest, show compassion, love everyone (including enemies), be virtuous, always be soft-spoken. (I’ve seen these stated in other ways. Some of the differences are just translation issues.)

What particularly struck me was the restrictive style of meditation he describes as the only way to achieve enlightenment—and this isn’t something that happens for most people in a matter of decades or even lifetimes. It begins in the lotus position, left ankle over right thigh, spine straight, hands held at beltline in a particular posture. The mind is focused on a point about three inches from the navel. Nguyen does at least two one-hour meditations during the day.

The temple is open for Buddhist high holidays, but Nguyen is available Sundays after about 3:30 p.m. He’ll explain Vietnamese Buddhism patiently to anyone who seeks the knowledge.

Quang Nghiem Zen Buddhist Temple, 13420 Red Rock Road, is open to the public during Buddhist high holidays and available to visitors on Sundays after 3:30 p.m. by calling 970-5236.