In Buddhas Path on the Streets of San Francisco

San Francisco, CA (USA) -- A BLOCK off Grant Avenue in San Francisco’s Chinatown - beyond the well-worn path tourists take past souvenir shops, restaurants and a dive saloon called the Buddha Bar - begins a historical tour of a more spiritual nature. 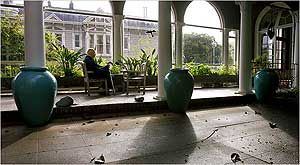 << FOLLOWERS Meditating in the courtyard at the San Francisco Zen Center.

Duck into a nondescript doorway at 125 Waverly Place, ascend five narrow flights and step into the first and oldest Buddhist temple in the United States.

At the Tien Hau Temple, before an intricately carved gilded wooden shrine and ornate Buddha statues, under dozens of paper lanterns, Buddhists in the Chinese tradition still burn pungent incense and leave offerings to the goddess Tien Hau in return for the promise of happiness and a long life.

Established in 1852 by Chinese immigrants who came to California during the Gold Rush and named for a 10th-century provincial woman who protected people at sea, the original temple burned down in the fire set off by the 1906 earthquake but eventually found its new home in this three-block-long alley.

Over the next 150 years, San Francisco would continue to water those early seeds of Buddhism planted in America, as geography, social history and waves of immigrants made it fertile ground for a once esoteric tradition now grown so popular that the Dalai Lama regularly fills football stadiums.

“Since the 1800s, San Francisco was the most important gateway for people coming from the Pacific Rim,” said Charlie Chin, artist in residence at the Chinese Historical Society of America in San Francisco, who also leads tours and gives lectures. “They weren’t proselytizing Buddhism, but they brought it here with their other cultural beliefs and practices.”

Today, a spiritual tourist, whether Buddhist or not, can find inspiration if not enlightenment following in the footsteps of American Buddhism on a pilgrimage throughout the Greater Bay Area.

The Buddhism the Chinese brought was a spiritual mix of traditional folk beliefs, Taoism, Confucianism and Chan, the antecedent of Japanese Zen. Though there are differences, central to both Chan and Zen is meditation, or zazen in Japanese, as well as the Buddha’s basic lessons of compassion, impermanence and awareness of the present moment.

Japanese immigrants arrived in San Francisco in the late 19th century as agricultural laborers, bringing Zen and its variations. In 1898, they founded the Buddhist Church of San Francisco in the downtown district. Based on a sect of Buddhism called Jodo Shinshu (Pure Land), America’s first Japanese Buddhist temple also burned down in 1906 but was re-established in 1913 at 1881 Pine Street, not far from the current Japantown. 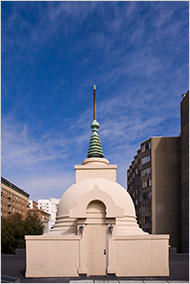 MONUMENT A stupa tower on a rooftop
houses sacred relics  >>

Now part of the Buddhist Churches of America, whose national headquarters are nearby at 1710 Octavia Street, the San Francisco center has pews in its worship hall that make it look like a Christian church or Jewish synagogue — that is, until you catch sight of the elaborate altar with a golden statue of the Buddha in the center. On the roof of the church is one of the most sacred Buddhist monuments in San Francisco. Housed in a domed tower (stupa in Sanskrit) that is topped by a spiral that looks like a braided hair knot is a small box containing what are said to be a bit of the Buddha’s ashen bone relics, a gift sent in 1935 by the ruler of Siam. Visitors may ask to view the box.

It was not until the 1950s that interest in Buddhism grew with the next wave that migrated to San Francisco. Though these immigrants were not Asian, they did settle in downtown at the edge of Chinatown, where an intrepid pilgrim can continue to follow their footsteps.

In fact, starting in the mid-50s and continuing into the 1960s, a series of events and trends turned San Francisco into a hothouse for new varieties and strains of American Buddhism.

As unlikely as it sounds, it started at a cluttered little independent bookshop that itself seems like a throwback to another era.

At the busy intersection of Columbus Avenue and Broadway, which separates Chinatown from the bohemian-style cafes, neon-lit Italian restaurants and the block-long red-light district of North Beach, the poet Lawrence Ferlinghetti helped found the City Lights Bookstore in 1953 as the first all-paperbound bookshop in the country. Across from where entertainers like Lenny Bruce worked out new material at the Hungry i (now a topless club) and the Purple Onion (still showcasing comedy), Mr. Ferlinghetti published Allen Ginsberg’s “Howl and Other Poems” in 1956. City Lights became an unofficial headquarters of the Beat literary movement, the hangout of Mr. Ginsberg, Jack Kerouac, Gary Snyder, Philip Whalen and many other authors who were reading, practicing and writing about Buddhism.

“I made a beeline to City Lights as soon as I moved to San Francisco in the 1960s,” said Wes Nisker, a Bay Area FM radio commentator who now teaches and writes about Buddhism and performs the one-man musical “Big Bang, the Buddha and the Baby Boom.” “It was the epicenter for a radical new kind of Buddhism that was beginning to flower in America. As a budding Buddhist myself, I had to make it the first stop for my own personal pilgrimage.”

In 1959, Shunryu Suzuki, a Buddhist priest from Japan, came to San Francisco to teach Zen to ethnic Japanese in the city’s Western Addition and Japantown. But so many Westerners were attending his talks that three years later Suzuki-roshi (roshi means teacher) established a separate Zen center on Page Street, down the hill from Haight and Ashbury Streets, crossroads of another ’60s movement also in search of peace, love and happiness.

“It was a time of great foment, when there was enormous interest in one’s inner life,” recalled Yvonne Rand, the resident teacher at Goat-in-the-Road, a Zen center in Mendocino County, who first attended Suzuki-roshi’s meditation classes in 1966 and quickly became his secretary. “Roshi attracted people in the arts, civil rights activists and other agents of social change and consciousness — all hanging around the Bay Area.”

Visitors headed to the Tassajara center today must travel 14 miles of hairpin turns on a narrow dirt road descending into the rugged Los Padres National Forest, where the rustic retreat center straddles a creek in which practitioners can cool off after soaking in the hot springs.

Also in 1966, an unwitting promulgator of Buddhism in San Francisco came in the person of the Chicago industrialist Avery Brundage, whose huge collection of Asian art was the starter set for the Asian Art Museum. With 17,000 objects now, it is the largest museum in the United States devoted exclusively to the arts of Asia. At its opening, Mr. Brundage called the museum “a bridge of international knowledge and respect” and “San Francisco’s contribution to a happier and more peaceful world.”

In 2003, when the museum moved to its current site in the Civic Center area, the permanent galley exhibition was redesigned so that a visitor can literally walk through the history of Buddhism in art, sculpture and other artifacts, including the world’s oldest known dated Chinese image of the Buddha, a gilt bronze statue from the fourth century.

Over the last 30 years, a new variety of Buddhism has gained momentum, and once again the Bay Area is playing a prominent role. Socially engaged Buddhism, developed in the 1970s by the Vietnamese monk Thich Nhat Hanh, takes Buddhism out of the monastery and applies its basic tenets in areas like prison reform, AIDS and hospice work, human rights, conflict negotiation and stress reduction. Among the Bay Area groups leading this movement are the Buddhist Peace Fellowship, an international organization based in Oakland, and the Zen Hospice Project, whose 5-bed center in a restored Victorian house on Page Street is being renovated and is expected to reopen in a year. The project also has a 24-bed unit at the Laguna Honda Hospital in the Twin Peaks section of San Francisco.

But as Thich Nhat Hanh himself said, sometimes the best activity is no activity at all when it comes to any Buddhist pilgrimage. “Don’t just do something; sit there,” he suggested, by which he meant that meditation is the journey that leads to the heart and soul of the tradition. And while there are any number of Bay Area centers to learn and practice meditation, one can also find peace and tranquillity in the most unexpected places in the city — among early morning tai chi practitioners in North Beach’s Washington Square, at the Japanese Tea Garden in Golden Gate Park or in the heart of the bureaucratic-minded Civic Center.

On a terrace outside the southeast corner of the Asian Art Museum, overlooking Fulton Street, a moment of quiet awaits at the Tibetan Mani Wall, the work of stone carvers from a region in Nepal near the border with Tibet. There, one can contemplate the Buddha’s own travel tip: “All living beings, whether they know it or not, are following this path.”

The Chinese Historical Society of America (965 Clay Street, San Francisco; 415-391-1188; www.chsa.org) has permanent and rotating exhibitions. Through Dec. 13: “Remembering 1882: Fighting for Civil Rights in the Shadow of the Chinese Exclusion Act.”