Redmond, WA (USA) -- Watching the fireworks at the Space Needle is not the only way to celebrate the new year. A temple in Redmond, known as Jingoji, offers a New Year’s event in which people can pray for fortune for the upcoming year. About 100 people visit Jingoji every year to participate in this event. 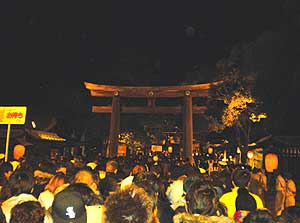 This Japanese custom is called Hatsumoude. Hatsumoude involves a visit to a shrine in hopes that the new year will be a great year for friends and family. Ryusei Kitahara — originally from the Hida Kokubunji temple in the Gifu Prefecture of Japan — is in charge of this event. He was assigned to Jingoji in November 2008. It will be his first time spending New Year’s Day in the United States.

“There is no time to pray for family’s health or business prosperity throughout daily life,” Kitahara said. “By going to the temple and paying a visit there, people are inspired to work hard to make it a great year. I think that’s what Hatsumoude is for.”

Jingoji was built in 2001. It moved to Redmond where the new main hall was added in September 2006. The hall was built by Japanese carpenters. The stairs outside of the hall is made of stones from Kouhukuji, a city in Gifu. Dark colors are commonly used to decorate Japanese temples, but Jingoji’s hall is comprised of bright red, green, and white.
Kazue Akiyama, who helps with the New Year’s event, said the temple was built in patterns and colors similar to those in the temple of Mt. Kouya in Japan.

The New Year’s event at Jingoji attracts Japanese people who live in the state of Washington. Mayumi Shimizu, who currently lives in Bothell, plans to attend the event. She has attended other events that Jingoji puts on such as the Girls Festival (Hinamatsuri). Shimizu goes back to Jingoji because she likes the people who work there.

Shimizu has known the chief priest of Jingoji, Housho Nishibu, for 10 years. Nishibu helped during Shimizu’s wedding, and they have kept in touch since.

“When I visit Jingoji, it’s a tender feeling. That’s because Nishibu does not associate me as a part of business,” Shimizu said. “He makes me feel [welcomed] that I want to visit Jingoji again.”

The New Year’s event starts Dec. 31 at midnight. Kitahara and Missho Malum, Akiyama’s husband, will hold the event this year because Nishibu is in Japan until March 2009. The temple bell will be tolled 108 times to cleanse participants’ worldly desires. Participants are also able to toll the bell.

On Jan. 1, Hatsumoude begins at 11 a.m. and will be held through Jan. 3. The visitors can pray for wishes such as their family’s safety. Kitahara and Malum will perform a ritual known as goma, meaning holy fire, which involves burning small pieces of holy wood before a Buddhist alter for spiritual purification.

They will perform every hour until 3 p.m. Jingoji offers a sweet alcoholic drink made of fermented rice. The drink is believed to protect people from evil. Lucky charms are available for purchase for $5.

“If you are not Japanese, this event is a great opportunity to experience Japanese culture. If you are Japanese, it is a perfect chance to pray on New Year’s Day like when you were in Japan, as there are not a lot of opportunities to attend Hatsumoude in Washington state,” Kitahara said. “I would like everyone to visit Jingoji and greet the New Year with a peaceful and refreshed heart.”(end)